Who’s to blame for the dirty park? Read on! 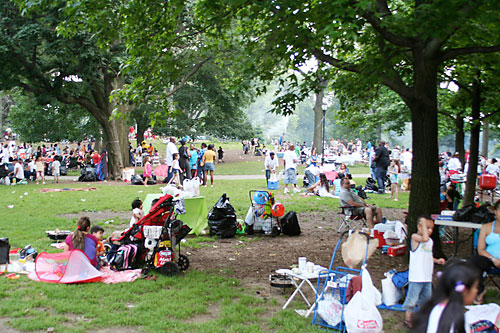 Prospect Park was a victim of its own popularity during the July 4 weekend, as hundreds of illegal barbecuers set up camp.
The Brooklyn Paper / Julie Rosenberg

Offering an explanation that sounds like it came from an old Arlo Guthrie song, the Prospect Park Alliance says the fabled greensward was so filthy over the long holiday weekend because there was no place to put the garbage!

Hours after The Brooklyn Paper reported on the disgusting condition that followed the hordes of barbecuers and freedom-celebrating park-goers on July 4 and 5, Prospect Park Alliance spokesman Eugene Patron offered this “Alice’s Restaurant”–style explanation.

“The Parks Department had a sufficient number of cleaning crews working all weekend,” he said. “But on Saturday [July 4], the Brooklyn dump was supposed to be open, and it wasn’t, so the drivers had to go to the dump in Queens.”

And that dump had limited hours, too, Patron said, leaving workers unable to swiftly get rid of all the garbage. Plus, its distance from Prospect Park meant more time for garbage truck drivers on the road, rather than in the park.

A backlog ensued, leaving the park in a horrific state for much of the weekend.

As you might imagine, this did not go unnoticed. The disgusting condition of the park was Topic 1 in the Slope for most of the holiday.

“The garbage left [near] Ninth Street and Parkside Avenue is beyond disgusting,” reader Josie Marino told The Brooklyn Paper. “There is no excuse for folks using the park as their backyard … but the real stupidity is that there are not enough garbage cans in these popular areas.”

Marino suggested that police should write more tickets. A Brooklyn Paper reporter saw an officer in a Cushman scooter not writing summonses near the Ninth Street entrance to the park on Sunday, despite dozens of illegal barbecues set up in non-barbecue areas.

The park was back to its normal self by midday Monday.

Patron said that the city’s normal big Sunday cleanup could not be accomplished until Monday because park users were already picnicking — and creating more garbage — as workers fanned out on Sunday morning.

“It’s very difficult to clean the park and have large vehicles moving around when people are already in there,” he said.

As a result of the filth, the Prospect Park Alliance is “looking into” a “carry in/carry out” policy that would ask users to take out whatever they bring in.

“It’s something we are considering,” Patron said. “It amazes me that people will carry in 50 pounds of picnic stuff, but they look at you as if you have two heads if you tell them to carry out the 10 pounds of garbage they create.”

A Sanitation Department spokeswoman said that the Parks Department should have been aware that the garbage dump on 50th Street, which is run by a private company, would be closed on July 4, a federal holiday.

“Check with the Parks Department about why they didn’t know that,” said the Sanitation spokeswoman, Kathy Dawkins.

We did just that, but found an agency that didn’t want to dump on its colleagues at Sanitation.

“There may have been a misunderstanding, but the big picture is that there were huge throngs of people in the park this weekend, said Parks Department spokesman Phil Abrahamson. “I really don’t want to get into why the dump was closed. But cleaning the park is a huge challenge during the summer and when the weekend was over, the park was cleaned properly.”

The whole mess is reminiscent of folk singer Arlo Guthrie’s album-length single “Alice’s Restaurant Massacree,” which details, at great length, how he was once arrested after illegally dumping the refuse from a particularly large Thanksgiving feast at the aforementioned eating establishment.