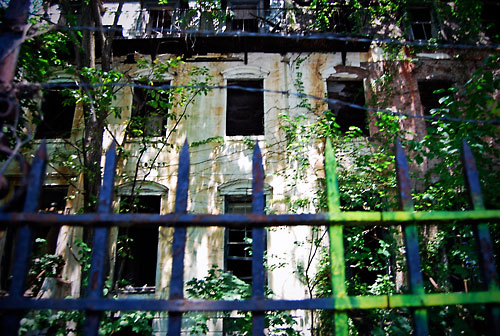 The debate over whether to tear down a row of historic, but severely dilapidated, homes inside the Brooklyn Navy Yard along Flushing Avenue has pit residents of the nearby public housing projects, who want a long-promised supermarket on the site, against historic preservationists, who say the homes can be saved and reused.

Both camps rallied at Borough Hall last week at a public hearing over the fate of the so-called “Admirals Row” houses. To further that debate, The Brooklyn Paper presents this smackdown between a supporter of the Navy Yard’s supermarket plan and an opponent.

Downtown Brooklyn is undergoing one of the most significant development projects in the country if not the world. However, the Public Housing Developments of Ingersoll, Walt Whitman and Faragutt are being isolated and cut off from the opportunities now available in the community.

This is a blatant case of discrimination and the overall neglect of an entire community of American citizens. The Brooklyn Navy Yard wants to finally build something that will not only benefit the three Public Housing Developments, but the entire Downtown Brooklyn community. We desperately need the jobs and access to affordable quality groceries that will be available and easily accessible for our residents.

Our government has the duty to protect its people. We have not been protected or respected by anyone to date. This is an opportunity for the government step in and to rectify this wrong being inflicted on our residents by allowing the removal of the Admirals Row homes now and use its influence to speed up process of building the supermarket.

The Admirals Row Houses allow us to imagine what Brooklyn was, and what it can become. When Congress voted to offer to sell the property to New York City in 1988, the houses, although already vacant for years, were an extraordinarily intact row of mid- to late-19th century residential architecture, including superb examples of Second Empire, Italianate and Queen Anne styles.

Constructed between 1850 and 1900 the buildings were a dignified ensemble of homes for the officers of the Brooklyn Navy and their families, a role they continued to serve from before the Civil War until after the Vietnam conflict. These were solid, handsome buildings that housed people with the important job of protecting our country.

Just like bank buildings of the era were advertisements of importance and solidity of their finances, these buildings symbolized the strength of our nation and the importance of Brooklyn to our country. The symbolism and promise of these buildings remains intact.

It is a profound failure of imagination to insist that this row must be demolished for a parking lot instead reusing them for needed community amenities. There is plenty of room on the six-acre property for a supermarket and industrial uses behind the buildings, especially if the necessary parking is incorporated into the new buildings.

With regard to financing the buildings’ reuse, this site has the potential to be enormously profitable for any supermarket developer; Home Depot, Lowe’s and Target all have their highest earning stores in New York. In return for what is sure to be a wildly successful venture, the developer should be required to give back to the local community and the city by making good on the promise of Admirals Row and returning these buildings back to Brooklyn.