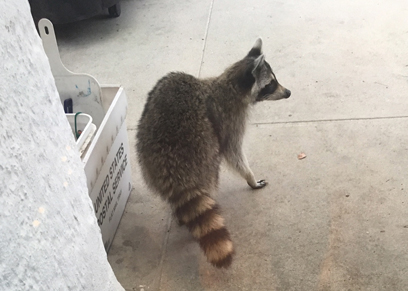 Frequent visitor: This raccoon has been seen near Coleman Street all spring, according to one resident.
Jeanette Z

Folks live in Marine Park because they like the quiet life — but now they’re getting a taste of the wildlife.

Raccoons and other varmints are overrunning the suburban neighborhood, locals say, and social media is awash with pictures of the furry creatures.

“They seem to be popping up all over,” said Jeanette Z., who didn’t want to use her full name because a family member works for the city.

Police responded to a report of a possibly rabid raccoon on Haring Street in Madison near the border with Marine Park on May 8, and an Emergency Services Unit arrived to capture the critter.

Rabid raccoons are euthanized, but if authorities determine that the animal is not actually sick, police move it to a safer location, such as a park, according to a police spokesman. Police will avoid harming a healthy animal whenever possible, but public safety is paramount.

“Usually they try to corral it into a cage,” he said. “If it’s vicious at any point then they try to tranquilize it.”

Locals started reporting frequent raccoon and opossum sightings in late April and early May, as several Marine Parkers began sharing pictures of the animals to a local Facebook group. Some commented that there are more in the neighborhood recently. Jeanette said she has heard from coworkers and neighbors that more critters have started showing up since the end of March. She has only seen the same big, fearless raccoon that repeatedly prowls around her house on Coleman Street — and she’s at a loss to fend it off.

“It’s in the trees, on the garage roof, climbing over the fences,” she said. “It’s big and fat and comes out in the daylight. It’s not afraid when I throw water at it.”

Other Marine Parkers have encountered less intimidating raccoons. One man posted a picture of a raccoon sleeping on his patio furniture during the day, prompting dozens of comments about other furry encounters.

“I was surprised there were so many raccoon sightings,” said John Chan. “I’ve driven around at night and seen opossums, but never raccoons.”

Chan said he will replace cushions that the animal relieved itself on, and will start bringing them inside at night. Jeanette said she hopes to trap the rotund raccoon frequenting her house and take it to a more forested area nearby.

Some of the comments focused on the fact that the raccoons are being spotted during the day, since the animals are normally nocturnal. Raccoons active during the day could have rabies, but that isn’t necessarily the case, according to Wildlife NYC — a city initiative to spread awareness of the wild animals that often live in urban spaces. People who see raccoons should refrain from feeding them, keep their distance, seal off areas where they could make dens on a property, and vaccinate their pets, according to its website.

The city said that homeowners who want to hire a professional to trap and remove raccoons or other wildlife should contact the state Department of Environmental Conservation, which oversees state wildlife. Department officials did not respond to requests for comment on the raccoons in Marine Park.

This is not the first time Southern Brooklyn has been overrun with raccoons. In 2016, Gerritsen Beachers reported rampant raccoons roaming throughout their neighborhood.

Of course, some Brooklynites credit — or blame — legendary police officer and “Bugbuster” Jimmy Baldessano for repopulating Brooklyn with four-legged varmints.