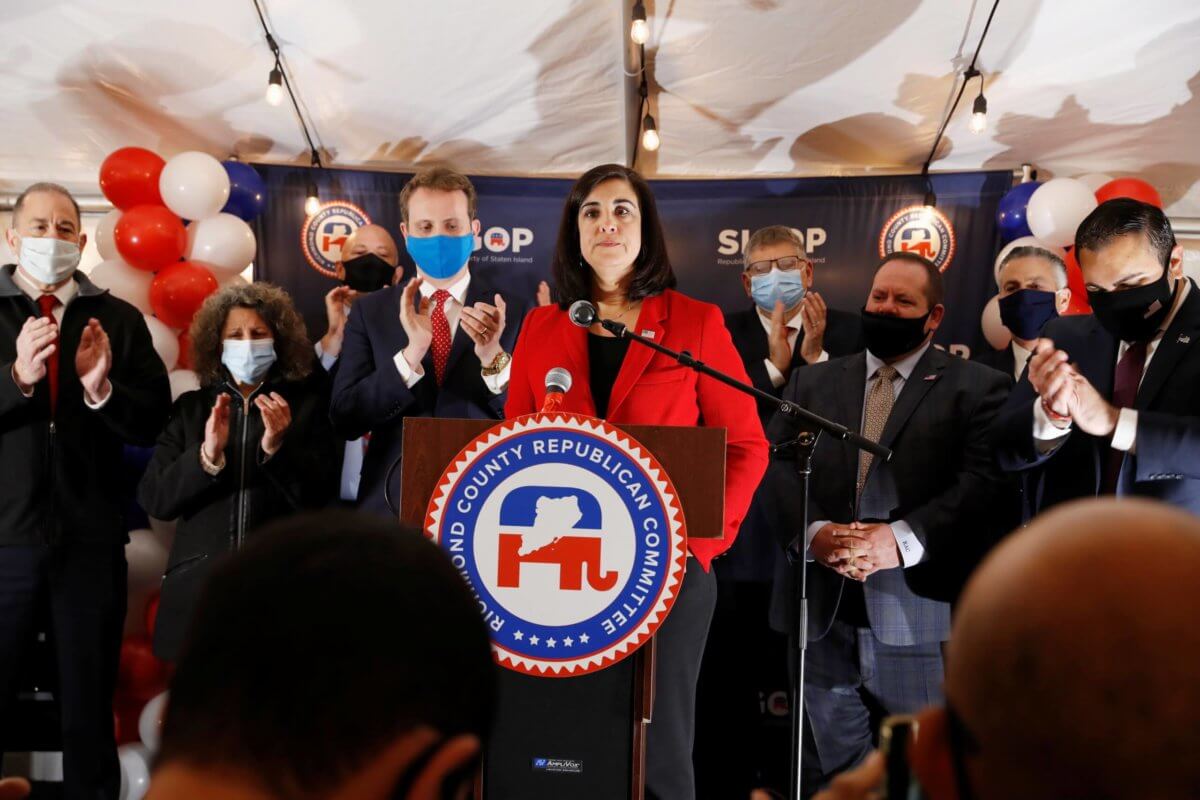 A bipartisan, community-based political action committee against Congressmember Nicole Malliotakis has quickly gained traction since it went public on Jan. 30, raising more than $20,000, according to the political operative behind the movement.

“Our PAC is a grassroots PAC: there’s no dark money, and it’s not connected with any candidate,” said Jonathan Yedin, a political consultant and a former advisor for Bay Ridge Councilmember Justin Brannan. “Its sole mission is to hold Nicole accountable and hopefully defeat Nicole in the next election.”

The founding of the Nicole is Complicit Political Action Committee, or NICPAC, came only weeks after Malliotakis took office on Jan. 3. The Republican lawmaker — who represents Bay Ridge, Dyker Heights, Bensonhurst, Gravesend, and Staten Island — quickly found herself embroiled in controversy after she voted against certifying the electoral votes in Pennsylvania and Arizona because of alleged voter fraud on her third day in office.

Malliotakis stood by her objection to the electoral votes even after a handful of her Republican colleagues withdrew their challenges following the Jan. 6 insurrection of the US Capitol, spurring crowded protests outside Malliotakis’ Bay Ridge and Staten Island offices.

“She must vote to either support the 25th Amendment removal of President Trump — because he is completely and utterly unfit, as so many of us have known — and if not, to vote to impeach him. That is what she needs to do,” said Boerum Hill Assemblymember and candidate for borough president, Jo Anne Simon, who was one of several politicos who spoke at the Jan. 9 protest in Brooklyn. “And if she doesn’t do that, we need to make sure that she goes.”

Malliotakis’ vote also spurred Yedin and a group of other residents in the 11th Congressional District to think about ways to take action, he said.

“We have a bipartisan group of founders that came together and not only complained about what she was doing, but actually wanted to step up and do something about it,” he told Brooklyn Paper. “We were just kicking around some ideas right after the Jan. 6 assault on the Capitol.”

Five of the founding members are Democrats, three are Republicans, and three aren’t registered to either party. Some members even voted for Malliotakis, but their opinions of her soured after her challenge of the electoral votes, said Yedin, who declined to release his fellow founders’ names due to fears of retribution.

“This isn’t Democrats attacking Republicans. We have folks that voted for her,” he said. “This is about us and those folks coming together.”

Malliotakis’ re-election is nearly two years away, and by then, the 11th Congressional District will have been redrawn as part of the country’s redistricting process. One Democratic challenger, Brittany Ramos Debarros, has already announced her candidacy, but Yedin said that the PAC is currently focused on influencing Malliotakis’ votes rather than boosting a specific candidate.

“The overall goal and mission of the organization is to hold her accountable, particularly on votes,” he said. “How we intend to do that is through social media, eventually paid media (digital advertising). We’ll consider doing direct mail, TV, phone banking.”

Malliotakis has already taken some steps that the PAC supported, such as voting to strip Republican Rep. Marjorie Taylor Greene of her committee assignments after the Georgia rep’s social media posts amplifying conspiracy theories came to light. But Yedin is still pushing the southern Brooklyn representative to denounce her former consultant who said “Heil Hitler” during a protest against coronavirus restrictions, and slammed the lawmaker for voting against an infrastructure bill that would allocate $30 billion towards public transit nationwide.

So far, NICPAC has released two videos that tie Malliotakis to the Jan. 6 insurrection by juxtaposing her remarks about voter fraud with footage of the Capitol attack.

Malliotakis, for her part, has said that the allegedly fraudulent votes weren’t necessarily enough to “steal” the election, as former President Donald Trump claimed, but that they warranted an investigation.

“I voted against certification of the two challenged states not to ‘overturn an election’ but to highlight need for a proper hearing into unconstitutional rule changes, irregularities and alleged fraud,” she wrote on Twitter on Jan. 7. “I swore an oath to the Constitution and REFUSED to turn a blind eye.”

One local Republican leader argued that it was unproductive for the PAC to antagonize Malliotakis from the get-go rather than work with her.

“There used to be a concept for the first 100 days of a honeymoon period, when officials give each other a chance to at least work things out,” said Liam McCabe, a district leader and the president of the Verrazzano Republicans.

And though Yedin said he stepped down from his post as a senior advisor for Councilmember Justin Brannan in early January, McCabe suggested that Yedin’s close ties to the pol puts the two lawmakers at odds — potentially hurting Brannan’s constituents.

“How is [Brannan] supposed to negotiate the one Republican congressperson going down to Washington?” asked McCabe, who staged an unsuccessful bid for Brannan’s seat in 2017. “She would have a major role in helping rebuild the city. And even if they don’t take the majority, you still have to have a relationship with the minority to get things done.”

But Yedin emphasized that the PAC is focused on informing voters about Malliotakis’ votes rather than sewing division.

“We saw in New York 11, [Former Congressmember] Max Rose and Nicole both shatter the records for turnout. There’s no question that people are much more aware and knowledgeable and paying attention to politics,” said Yedin, adding that the NICPAC is one of the first community-based political action committees in the city. “Nobody has taken it to the step of actually forming a PAC like this.”

A representative for Malliotakis did not respond to a request for comment.