By The Brooklyn Paper Prognostication Team Posted on January 8, 2014 The future is unknowable, but we are students of the recent past and, based on the analysis of our in-house team of experts, we have an idea what the next year might hold. We’re confident these borough gadflies, bosses, changing neighborhoods and upstarts-made-good will give our resident scribes plenty to write about in the coming year.

In mid-July 2013, Bill DeBlasio was getting arrested doing civil disobedience to draw attention to the state’s attempt to close Long Island College Hospital and, according to him, sell the prime real estate it sits on to a luxury developer.

Fighting hospital closures was one of the signature issues of DeBlasio’s campaign. But pointing out that Gov. Cuomo pulls the strings at the state health department and the State University of New York, which were bent on shuttering the place, was not in his vocabulary. Bill DeBlasio's political fortunes are entwined with the fate of Long Island College Hospital, but how entwined?
Photo by Elizabeth Graham

Five days before his landslide November win, DeBlasio refused to divulge what the governor has been saying about the 155-year-old Cobble Hill hospital’s fate behind closed doors. But in December, the state decided to hold off on considering a plan to turn the medical center into condos, offering to hand the keys over to the city instead.

The ball is in the freshly-minted mayor’s court. In 2014, with the governor’s goodwill at stake and a whole city’s problems competing for his attention, will DeBlasio finish what he started with the hobbled hospital, or will he let the issue languish now that his progressive pledges have carried him to City Hall?

Brooklyn’s first black district attorney has taken the reins at the prosecutor’s office after 24 years of Charles Hynes in charge. Thompson painted his opponent as corrupt and beholden to political special interests, but the rubber is going to meet the road in 2014 now that Thompson has to make actual decisions about how to handle some of the most hot-button cases still wending their way through the courts.

What, for instance, will become of the reams of paperwork handled by assistant district attorney Michael Vecchione, who Thompson slammed on the campaign trail for wrongful convictions that came out of alleged prosecutorial misconduct? Or how about the pending prosecution of Orthodox Jewish sex abuse whistleblower Sam Kellner on extortion charges Kellner and others say were politically motivated?

But one of the big questions has already been answered. Last Saturday, the New York Post first reported that Thompson has hired Abe George, the former Democratic candidate for borough prosecutor whose late July exit from the race paved the way for a Thompson win. George will be the deputy bureau chief of the district attorney’s Major Narcotics Investigations Bureau.

Brooklyn’s central shopping and office district started to undergo a huge transformation in 2004 thanks to a rezoning that allowed skyscrapers to rise. Now, residential development is going whole hog and Fulton Mall has half-turned over to chain stores, including high-end retailers such as Swarovski and Armani Exchange. Some 3,300 apartments are expected to be built during the next three years, increasing the neighborhood’s population by four-fifths to 21,000. And, as hordes of mostly well-heeled people move in, so too will up-scale eateries, bars, and grocery stores catering to their domestic wants and needs. The influx will strain already-taxed infrastructure and add to crowding in nearby neighborhood public schools. It will also build pressure to create such a school Downtown, where there is not one and none are planned, despite the huge growth. The city’s process for planning a new school takes years and has increasingly come to rely on the cooperation of big developers to build learning centers inside luxury buildings. There are plenty of high-priced towers planned to rise Downtown, but so far, the city has given no indication that it intends to put a school in any of them.

The former Fort Greene councilwoman may be off to a rocky start as public advocate thanks to her lie that she pushed the New York Times to do an exhaustive front-page series on homelessness in the city, but James has built her career outside of traditional political channels.

The public advocate’s office has long been an ugly duckling in the city’s structure. It is all-but-powerless and has been the subject of frequent calls to abolish it entirely. But it has new stature now that DeBlasio, the city’s last full-time nag, is in executive office. The G train needs a lot of work.
Photo by Stefano Giovannini

Something tells us part of James’ loose-tongued lapse came from the enlarged ego that arises out of being a momentary center of attention at City Hall. And if DeBlasio’s liberal leadership stays a hit with New Yorkers and James can avoid putting her foot in her mouth too often, she is the politician best positioned to follow his road-map from outsider to top office.

There are a battery of big changes the Brooklyn Local needs to meet its long-suffering riders’ needs, but the Metropolitan Transportation Authority is holding off on most of them until it can find funding. In the meantime, Ghost Train commuters have a handful of welcome-but-minor improvements to look forward to, including better spacing between G and F trains, standardized stopping points for the four-car strands, public announcement systems at the 12 stations that do not have them, and better signage. Let us just hope that the next stop is the major overhaul the borough’s backbone deserves. And that it arrives soon.

The new Beep started the year with two big pledges befitting the theatrics his predecessor loved: bringing Brooklyn its own ball drop in time for next New Year’s Eve and establishing a borough Hall of Fame. We will of course be watching to see what other tricks he has up his sleeve and whether he will follow through.

Eric Adams has a lot on his plate — and looming over his head.
Photo by Stefano Giovannini

But we will also be waiting to see what, if anything, happens with the May 2013 revelation that Adams is being a probed by the Federal Bureau of Investigation. The feds are not known for sharing when they have finished sniffing around about corruption — or when they are about to pinch a prominent pol — so Adams, who denies he has ever done anything corrupt, has to spend the year in suspense. So, too, do the rest of us who keep tabs on him for a living.

Park Slope residents who want to see traffic reined in hit a speed bump in 2011 when the city snubbed their bid to have the neighborhood designated a “Slow Zone,” but the efforts have been picking up speed since the tragic October 2013 death of 12-year-old Samuel Cohen Eckstein on Prospect Park West. Activists, including Cohen Eckstein’s parents, spent the fall ramping up demands for a citywide 20-mile-per-hour speed limit on residential roads, which the Cohen Ecksteins say would have saved their son from being killed by a van. The road safety activists have gotten the word out through community meetings, a Council hearing, an attention-grabbing stunt involving fake speed limit signs, and, most recently, at Mayor DeBlasio’s inauguration.

The car critics found a receptive ear on New Year’s Day with DeBlasio’s roads appointee Polly Trottenberg, but they are not complacent. The group Right of Way has vowed to keep the mayor to his promise of reducing traffic deaths to zero by trumpeting every fatality in 2014 over social media. As the weeks pass and DeBlasio’s campaign rhetoric fades into the muddle of everyday governance, it will be interesting to see what else these transportation gadflies will do to keep traffic calming on the Sloper-in-chief’s agenda. The last election brought a whole new crop of Council members to power in Brooklyn.

Laurie Cumbo sparked controversy even before she took office by pointing to low-income black people’s resentment of Jewish business success as the likely cause of the so-called “knockout game” attacks in Crown Heights. She later apologized for the statement, but other big issues loom large as she takes the seat vacated by Letitia James, particularly Cumbo’s vow to be friendlier to developers. Laurie Cumbo is one of several new faces in the Council.

Police at neighborhood station houses stopped letting reporters access crime report information for our weekly police blotter in early December, citing orders from headquarters. Since then, we have only gotten access to three of the 13 precincts we cover due to what we are calling the blotter blackout. When the crime news embargo began, the New York Civil Liberties Union insisted that the clampdown was a parting move by former Commissioner Ray Kelly, whose relationship with the press had long been combative, and would quickly be rectified by new top cop Bill Bratton.

So when will it? 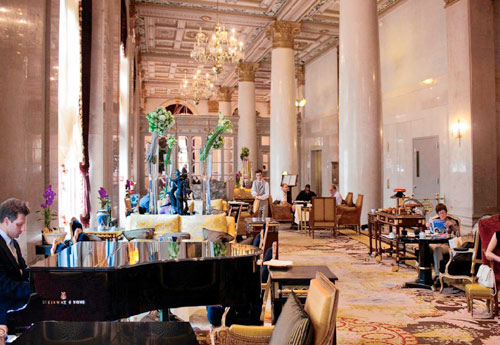 The Bossert Hotel could really open this year.
Courtesy of Bistricer LLC

It has been a long time coming, but the Bossert Hotel, once considered the Waldorf-Astoria of Brooklyn and host to the Brooklyn Dodgers’ 1955 World Series championship party, is slated to become an up-scale guesthouse again. The revamp comes after decades of the building serving as an apartment complex and providing housing to Jehova’s Witnesses. Rooms in the posh 302-room hotel are supposed to rent for $250 per night and could transform the sleepy neighborhood into a global destination.

The Nets’ former elder statesman switched into the role of rookie coach ahead of this season and so far it has not been pretty to watch. 2014 marks another year of Brooklyn Baywatch.
Photo by Elizabeth Graham

Park Slope’s hospital is expanding while nearby Long Island College Hospital and Interfaith Medical Center face shuttering after many lean years. Methodist’s apparent financial health is a good thing if you are a Methodist executive or a would-be patient, but tell that to neighbors who are against a proposed outpatient center that would take the place of 16 townhouses on three tree-lined blocks. The expansion will go up no matter what — the hospital can build a taller, thinner version without special permission if the city balks at its current plan.

But will the hospital continue to expand as the healthcare industry moves away from the hospital model, as one insider told us it is doing, and other one-stop medical centers limp along on life support?

Brooklyn was a dolphin graveyard in 2013, serving as the final resting place of four wayward cetaceans during the course of the year. Experts said a measles-like virus was responsible for the stranding deaths of 333 dolphins on the East Coast between July 1 and Aug. 27, including 96 on the shores of New York and New Jersey. But the coroner is still out on what killed the latest Kings County casualties, which is why we will be watching the borough’s ample shoreline for any sign of marine mammal maladies in the coming year. A deal is in place to sell a seven-tenths stake in the stagnated mega-development to a Chinese-government-owned firm, but it is unclear what that means for its future. Forest City Ratner maintains that it will keep control, but a group of politicians, including new Public Advocate Letitia James, are demanding the state put the brakes on the sale and look for a buyer that will create affordable housing first. Also, there is no time-line in place for starting work on any of the 15 un-built towers which, under an early Forest City pledge, were supposed to be finished by 2016.

Who did we miss? Let us know in an e-mail at [email protected].