City: Bus a move — away from Brooklyn Bridge Park 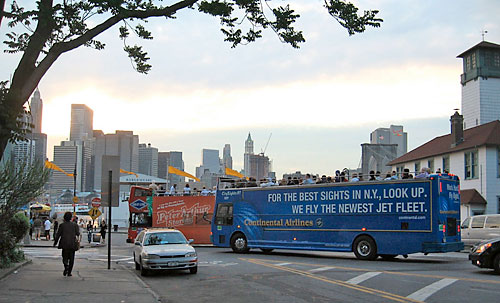 The city is moving to stop droves of double-decker tour buses from idling and clogging the foot of Old Fulton Street during the summer — a traffic debacle that’s reached a breaking point since Pier 1 of Brooklyn Bridge Park opened early last year.

The Department of Transportation and NYPD will install new “No Parking” signs — and step up enforcement — at the entrance to the park near Furman Street this spring, in order to end the giant buses’ reign over the streets before they start making their rounds again this summer.

Tourism isn’t the problem — locals argue that the buses double- and triple-park on the two streets near the pier to let their customers get off and tour the area. The buses idle for long periods and frequently block Furman Street, which acts as an access road for trucks coming from the beer distributors at Pier 7 and an alternative to the Brooklyn–Queens Expressway.

“It’s become a hazard because there’s so much traffic down there,” said Joan Zimmerman, Old Fulton Street resident and president of the Fulton Ferry Landing Association. “[Last summer], we counted 44 buses in one hour on that stretch, most of them double- and triple-parking.”

State Sen. Daniel Squadron (D–Brooklyn Heights) echoed Zimmerman’s woes at the Community Board 2 meeting last week, saying that he’d frequented the park in the summer and that the bus problem is “insane.”

He and Zimmerman said that they’re working with the city to eventually install a cement median in the middle of Old Fulton Street, which would replace a painted median that the buses currently use as a parking space.

That said, nobody wants to hinder the tourists from getting to the popular strip that features Grimaldi’s, Brooklyn Bridge Park, Ignazio’s, the River Café and Fulton Ferry Landing. But the new enforcement plan will certainly force planners to revisit the biggest gap in access to Old Fulton Street: parking. Park advocates have long complained about lack of spaces in Brooklyn Heights and DUMBO, especially since Pier 1 opened last year and park-goers flocked in.

A new median and a handful of ticket-toting cops are bound to prompt complaints from drivers. Brooklyn Bridge Park officials acknowledged the horrible parking problem on Old Fulton Street in their original environmental review, promising “approximately 1,283 new parking spaces in five parking facilities” due to high demand and lack of free spaces during peak park hours.

Of course, those facilities aren’t built yet — nor have they been discussed as imminent by park officials. Tour de farce! Dastardly double-decker tour buses are clogging Furman Street during the summer, and the city promises to put an end to the idling.
Fulton Ferry Landing Association