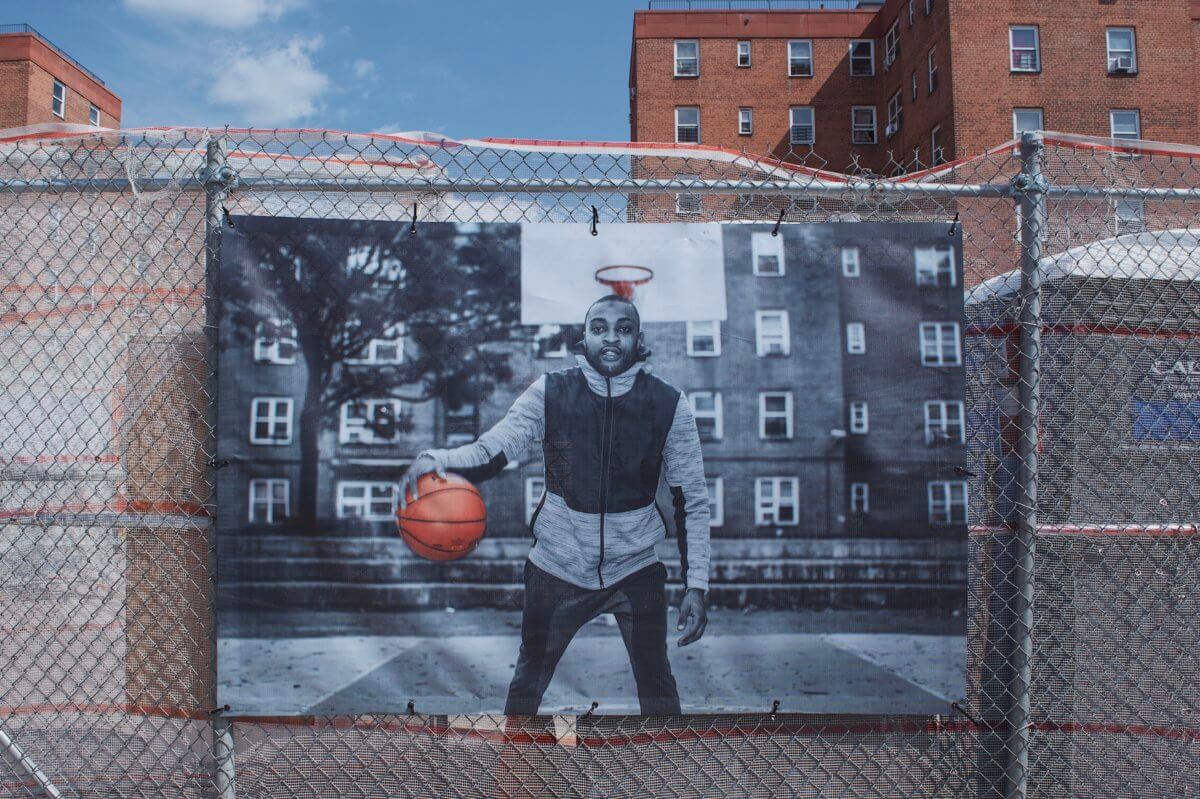 The “Bridging the Divide” program by the New York City Housing Authority — which was done in partnership with the Department of Cultural Affairs and the arts nonprofit ArtBridge — launched last week and will host two exhibits at the Red Hook Houses East and West projects for about six months to beautify the barricades.

The photo series “Red Hook Look” by local youth mentor, photographer, and videographer Alden Parkinson centers on community members such as a local basketball coach, a school crossing guard, fruit stall vendors, and neighborhood kids, which the artist hopes will provide a counter-narrative to the often negative portrayals of NYCHA residents of the waterfront nabe.

“A lot of people outside of the neighborhood, they paint their own picture rather than seeing it for themselves and we don’t appreciate that,” said Parkinson, who also lives in Red Hook Houses. “[The people in my pictures] are really talented at what they do and they also support the community.”

Parkinson’s images are in black and white with part of the picture colorized, such as a basketball, fruit, or a crossing guard vest — which highlights the work people are doing.

The exhibit is installed along Columbia Street near Center Mall and the photographer wanted people coming from outside the waterfront nabe – for example en route to Swedish furniture emporium Ikea down the street — will get a glimpse of a community they don’t interact with much.

“If people would stop and see what’s going on here, that would mean a lot to me,” Parkinson said.

The ubiquitous construction fencing at Red Hook Houses is part of a massive $550 million federal resiliency upgrade to the 40-acre complex which started in 2017, to storm-proof the buildings after they got battered by Superstorm Sandy in 2012.

Residents and activists took to the street in protest in late July demanding more transparency from the city on the large-scale construction project, saying that the building works have taken over the entire development and left little outdoor space and seating for locals amid the COVID-19 pandemic.

Another exhibit titled “I am Here @ Red Hook Houses” by Harumi Ori captures moments in time in the neighborhood, which the artist crafted with orange mesh and printed digitally at a larger scale.

Ori also created a collaborative piece with Red Hook NYCHA residents during workshops titled “We are Here @ Red Hook Houses,” and both of the pieces are on display along Hicks Street between W. Ninth and Mill streets.

The $30,000 arts project was funded by ArtBridge and is part of the Cultural Affairs Department’s City Canvas program, which seeks to transform construction fencing and sidewalk sheds as art works around the city.

Red Hook marks the first installation along public housing fencing, and the city plans to expand it to other NYCHA developments in Manhattan and the Bronx in the fall, according to officials.