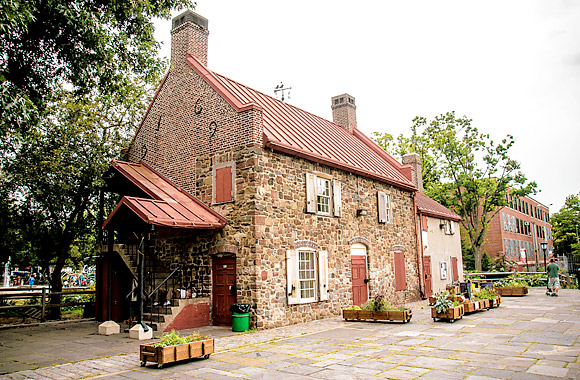 Historic site: The Old Stone House on Third Street between Fourth and Fifth avenues is the site where the Maryland patriots halted the attacking British army so the Americans could escape to safety during the 1776 Battle of Brooklyn.
Photo by Stefano Giovannini

The house, which currently sits in Washington Park, is a 20th-century reconstruction of a home originally built in 1699 that was, in the mayor’s words, “literally one of the most important sites of the entire American Revolution.”

In the pivotal Battle of Brooklyn in 1776, a group of about 400 soldiers from Maryland held the line against a much larger 2,000-strong regiment of British Redcoats at the Old Stone House, allowing George Washington and most of the American troops to cross the East River into Manhattan and escape to fight another day.

The Maryland 400, as they’ve come to be known, did eventually surrender to the British, who proceeded to occupy Brooklyn and Manhattan. But the heroics of the group at the Old Stone House were pivotal to preventing an early American defeat in the war: area Councilmember and Comptroller-elect Brad Lander on Thursday quoted George Washington as saying the battle was “an hour more fateful for the American democracy than any other.”

Over a century later, the house would again cement its place in Brooklyn history as the original clubhouse of the Brooklyn Superbas, the baseball club that became the Brooklyn Dodgers.

The house was demolished and buried under landfill in the late 19th century, but was excavated and rebuilt using the original stonemasonry into an exact replica in the 1930s. It was intended to be used as a recreational facility at the newly-constructed JJ Byrne Playground, but historically-minded Brooklynites lobbied for its recognition as a historic site starting in the 1970s, when historic preservation was going mainstream. Today, it serves as a museum, and provides year-round educational and cultural programming.

De Blasio entered city politics as the area’s councilmember in 2002, and made restoring the house and the park priorities.

“The park used to be a little funky. The playground was not the most modern playground,” Hizzoner said, noting that he and Lander, his successor, had invested city funds in restoration. “This whole area has blossomed, so to me it’s also a homecoming.”

The house, which was added to the National Register of Historic Places in 2012, is maintained through a mix of public and private funds, and the $10.95 million investment presented Thursday represents a massive cash infusion dedicated to keeping history alive at the abode.

“The Battle of Brooklyn is a story of resilience. And it was a very critical moment in our history,” said Kim Maier, executive director of the Old Stone House, on Thursday. “But it’s also a lesson we can all learn from in the future. Because our choices and our actions are what move us forward as a city, as a community, and as a nation overall.”