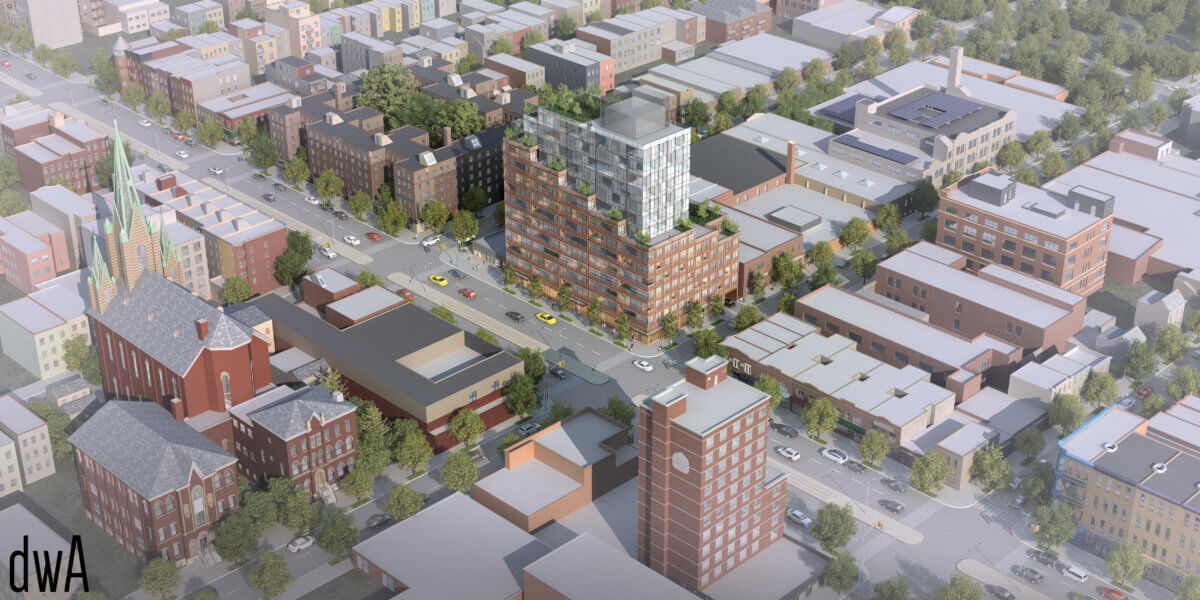 The City Council voted unanimously on Thursday to approve a 14-story mixed-use building in Greenwood Heights that would bring 134 housing units to Fourth Avenue.

The site between 24th and 25th streets currently features a one-story building that houses a Dunkin’ Donuts, but will now soon feature retail space and the apartments — 33 units of which will be earmarked as “below market rate” under the city’s Affordable Housing Program.

The green-light comes as Councilmember Carlos Menchaca — who holds outsized influence on the matter as the area’s city representative — gave his approval, citing the local community board’s 25-to-16 vote in favor of the project in November.

“From the start, Community Board 7 took control. CB7 forced the developer to redo their proposal several times before considering it,” said Menchaca at an April 22 City Council hearing.

The developer behind the project, Totem, adjusted their plans several times to meet the conditions set by the Greenwood Heights civic panel, and Menchaca commended the builders for binding themselves to the community’s demands by signing a Community Benefits Agreement.

“The developer, Totem, agreed to a CBA… that codified all the community board’s conditions, and it executed a CBA before the council held its first public hearing.”

Under the CBA, the 33 affordable housing units will be earmarked for those making between 30 and 60 percent of the area’s annual median income, and will not include any studio apartments.

In addition to the discounted units, Totem also promised not to transform the building into a homeless shelter, and to reserve the ground-floor retail space for local businesses, while making “a reasonable efforts to include public art” within the development site, and to provide an easement to the MTA to “facilitate future ADA elevator access at the 25th Street R Train station.”

A fight in Greenwood Heights is resolved

The building’s approval came after a months-long campaign by local activists against the building, who demanded that the developer earmark 100 percent of the units as affordable.

While Menchaca said he would have liked to see a building that adhered to those demands, he said the proposal was enough amid the ongoing pandemic to warrant approval.

“I would have preferred 100 percent affordable for example,” he said. “But it is what we need right now to recover from the pandemic.”

Members of the activist group Protect Sunset Park argue that Menchaca should have continued to advocate for 100-percent affordable housing in return for allowing Totem to rezone in order to build higher.

“It’s disappointing that Carlos Menchaca instead of choosing to fight for 100-percent affordable housing in the upcoming city budget,” Jorge Muñiz-Reyes told Brooklyn Paper. “Instead he’s really choosing to leave us with a deal that is going to bring about 100 additional market-rate units for mostly Park Slope income levels.”

Totem’s chief principal officer previously told Brooklyn Paper they could not feasibly make all of the units below-market rate, as the economics of purchasing the land would not add up to profitability, thus rendering their hands tied.

“If there were a city program that we were allowed to enter that would foresee 100 percent affordable, we would love to,” Tucker Reed told Brooklyn Paper. “But this land is not for free. It cost significant dollars to put together.”

The Totem rep also pointed to the elimination of studio apartments from the pool of affordable housing units, saying they made reasonable accommodations to “building more family-oriented.”

“We have been working to make sure that there are two- and three-bedrooms in the affordable units,” Reed said. “Going above and beyond the traditional breakdown to try to squeeze out one and two bedrooms because of a request to make the building more family-oriented.”

Muñiz-Reyes said the battle against 737 Fourth Avenue is not yet over, as he expects his organization will fight the rezoning in court.

“Some neighborhoods are winning in court, fighting these rezonings that were put forward,” he said. “We are going to explore that option.”

Protect Sunset Park, who also do work in neighboring Greenwood Heights, claims many neighbors of the rezoning are completely unaware of the proposal — citing their results from canvassing the area.

“We’ve been canvassing that area to let people know, nine times out of 10 people still don’t know this rezoning is happening,” Muñiz-Reyes said. “These Zoom hearings are happening abruptly in the middle of the workday excluding the vast majority of this working-class, immigrant neighborhood.”

Meanwhile, the developers lauded the council’s decision and reaffirmed their commitments to the Greenwood Heights community.

“We are thrilled by the City Council’s decision to approve the rezoning of this land for residential use. We have held conversations and discussions with the community over the past year and are confident that 737 Fourth Avenue will bring much-needed benefits to Sunset Park,” said Vivian Liao, co-founder and principal at Totem. “With the help of the community, we have specifically designed 737 Fourth Avenue to bring housing, transit accessibility, green design, and jobs to the neighborhood, while also setting a precedent for future inclusionary zoning with the CBA.”

Correction (April 28, 10:15 am): A previous version of this article compared opposition to the Greenwood Heights development to that against the Gowanus rezoning, stating that a judge involved in the latter dismissed a lawsuit from activists. A judge did not dismiss the lawsuit, but temporarily lifted a restraining order allowing the rezoning to move forward. This story has been updated to not compare the two.