Downtown church shopping itself around 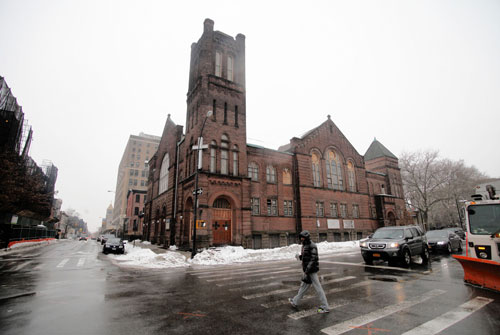 Church’s last prayer: Congregants of the Baptist Temple on the corner of Schermerhorn Street and Third Avenue are trying to find a developer who can transform the 120-year-old church into an 11-story mixed-use building, either by knocking down the original or building on top of it.
Photo by Jason Speakman

An old Downtown church is offering developers the chance to tear it down or build a tower on top of it.

The Recovery House of Worship, a 120-year-old Baptist church on Schermerhorn Street at Third Avenue, sits on one of the last big lots in the rapidly rising neighborhood and is looking for a deep-pocketed buyer to redevelop it. Church officials would prefer to keep the building, but they also want to cash in on the prime real estate it occupies, said a broker.

“They like the existing building a lot,” said Dan Marks, a vice president at the real estate firm Terra CRG, which is accepting development proposals on behalf of the church. “The question is, ‘Can they achieve what they’re looking for by keeping it or not?’ ”

Damage caused by a 2010 fire at the building, commonly known as the Baptist Temple thanks to the big stone letters on the side, has yet to be fully repaired. The church is hoping a redevelopment will leave it with a steady revenue stream and a bigger space in whatever ends up getting built.

“Being a church, they didn’t have the means of fixing the property by themselves,” said Marks.

The congregation wants a developer to bring in seven floors of residential, commercial, or hotel space while the church retains control of four lower floors, including retail space that the church could rent out. It is taking bids that would keep the existing two-story, red building standing, as well as ones that would tear it down.

The demolition option is a switch from the church’s initial call for redevelopment in 2011, which only allowed for bids that keep the existing structure and build on top of it.

Current zoning allows for up to 11 stories on the site, which is a stone’s throw from the Barclays Center and the Brooklyn Academy of Music. The church could make a hefty profit if it chooses to sell, but it would rather not move.

“It’s important for them to stay in the community and service the community,” said Marks. “And they can do this better in a better facility.”

Under the desired arrangement, the buyer would own any new commercial or residential space built, but the church would remain owner of its portion of the building, which it hopes would roughly double the size of the current space.

The building is not landmarked, but does appear on the National Register of Historic Places. It was originally erected in 1894 by Brooklyn’s first Baptist congregation. The Romanesque Revival-style building is made from brownstone and brick. It was badly damaged by a fire and rebuilt in 1918.

This is not the first time one of the Borough of Churches’ namesake chapels have tried to cash in on ballooning real estate values. In 2012, leaders at the nearby Church of the Redeemer sought to have their own house of worship condemned and redeveloped in an arrangement similar to the one the Recovery House of Worship seeks, with a church on the ground floor and residential or commercial space above. And shrinking flocks and rising land prices have led numerous other churches to sell off their biggest assets — their buildings — entirely. Going up or coming down?: The congregation of the Baptist Temple on the corner of Schermerhorn Street and Third Avenue is looking for a developer to re-purpose the 120-year-old church.
Terra CRG