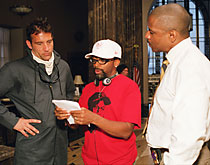 Acclaimed local filmmaker Spike Lee will set up an annex of his famed “40 Acres and a Mule” film company in DUMBO.

“Spike Lee is coming to 55 Washington Street in DUMBO,” a spokeswoman for Two Trees Management, the David Walentas-owned company that owns half the neighborhood, told The Brooklyn Paper.

It’s no wonder Lee was seeking new space. Earlier this year, the “Malcolm X” director claimed that high rents had forced him out of his main office space at 124 DeKalb Ave., where he had been for 22 years, and into a smaller space he already owned around the corner on South Elliott Place.

“Got priced out, the rent raise was insane,” Lee told The Brooklyn Paper in April.

The director, who gave Brooklyn the starring role in his signature films “Do the Right Thing,” “Crooklyn” and “Jungle Fever,” affirmed that he still had a working and personal relationship with the borough in the April interview — though he now lives in Manhattan.

The building, where he will now work at the corner of Washington and Front streets, is one of DUMBO’s best addresses (the office of The Brooklyn Paper is also in the building). Workers are currently building out a sunlit-filled, spacious corner area in the building’s sixth floor, which, according to city records, is undergoing a $30,000-renovation.

Walentas is well known in DUMBO for being a hard-nosed developer as well as a patron of the arts. He frequently gives rent subsidies to artists — though it is unclear whether the millionaire Lee was the recipient of Walentas’s largesse.

Lee had converted his earlier 5,775-square-foot space on DeKalb Avenue from a firehouse to a studio, and now the real-estate firm CitiHabitats is marketing the building as a duplex for a cool $4.9 million.

A message left with Lee’s production studio was not immediately returned.