Michael Holman, a former bandmate of artist Jean-Michel Basquiat, and Basquiat’s former girlfriend Suzanne Mallouk, led a discussion about the artist’s life the Green-Wood Cemetery Historic Chapel before guiding a group to his grave.
Photo by Elizabeth Graham

Green-Wood Cemetery in Sunset Park is the resting place of many famous Brooklynites, though none is more beloved — and most frequently visited by adoring fans — than artist Jean-Michel Basquiat.

On a gorgeous Saturday afternoon, two of the prolific artist’s friends led about 50 visitors down the cemetery’s winding carriage paths, and under colorful trees, to visit the grave site of the contemporary artist, who died in 1988 at age 27, leaving behind more than 2,000 paintings and drawings, and many close friends and collaborators.

“I was here when they put him in the grave,” said Basquiat’s former girlfriend, artist-turned-psychiatrist, Suzanne Mallouk, and author of poetic memoir, “The Widow Basquiat.” “Jean-Michel was a thoughtful, elegant man who was subversive — he lived his life in a way that was fearless.”

The grave visit was preceded by an on-site screening of documentary film about Basquiat, “The Radiant Child” — in which Mallouk plays a prominent role; afterwards, the art lovers boarded Green-Wood’s signature green trolley, and were treated to a historical cemetery tour delivered by Historic Fund Director of Development and Marketing Lisa Alpert, before quietly paying their respects.

“Basquiat is one of the top two or three people visited here,” Alpert explained. Green-Wood has recently begun to rebrand itself as a leading historical institution, and Alpert hopes that events like this one will generate interest, and bolster support, for more cultural programming.

“People are moved when they visit him. They leave little objects ephemera, on his gravestone; There’s an empty wooden frame, pennies, flowers, all sorts of unusual things — people want to honor the amazing spirit that this man was. Green-Wood is an amazing place, and visiting his grave here, is poignant and special.”

Basquiat is, to this day, one of the most prolific and celebrated contemporary artists of the 20th century. Born in Brooklyn in 1960, his artwork explores social and racial injustices, and is riddled with confrontational phrases, words and codes. Regardless of taste, Basquiat’s work elicits strong reactions from its viewers — Mallouk says that “unless you’re a psychologically minded, self-reflected person who can deal with your own demons, you can’t handle his work” — and those who made the pilgrimage to Green-Wood on Saturday found themselves moved.

“It’s the combination of content and location, it’s so intriguing,” said Nicole Rochat of Kensington. “The film is beautiful and the cemetery is amazing — it’s the perfect place to do this.”

Natasha Walker, a Flatbush resident and Basquiat enthusiast, was especially affected by standing so close to Basquiat’s resting place.

“It’s surreal to be here, so close to his grave,” Walker said. “I’m glad he’s here, with so many other great people, where he was brought up, in Brooklyn.” 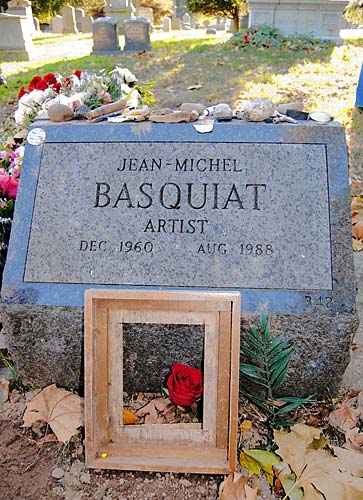 Jean-Michel Basquiat was buried in Green-Wood Cemetery in August of 1988; a group visited his grave on Nov. 5, to pay homage to the late Brooklyn-bred artist.
Photo by Elizabeth Graham