By Mike McLaughlin and Evan Gardner Posted on October 28, 2008 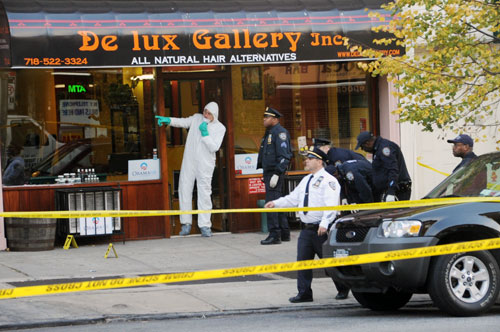 The two gunmen who killed another man and wounded four bystanders — including an off-duty cop — in a Fulton Street beauty parlor in a classic rubout on Monday afternoon remain at large, cops said on Thursday.

The broad daylight hit brought to mind the neighborhood’s all-too-recent dark days, when crime and killings were common.

“It was like the Wild West,” said Sivena Smith, a cashier in the Cake Man Raven bakery on Fulton Street, where the murdered man had just bought a piece of cake. “I’m just glad my appointment [in the beauty parlor] wasn’t until Thursday.”

Witnesses and police sources said that two men jumped from a dark SUV, possibly a Chevy Tahoe, and began shooting at a 19-year-old pedestrian who had just stepped out of the renowned bakery at around 1:30 pm.

The victim fled down the street and sought cover in the De lux Gallery, a salon, but the shooters chased him inside and killed him with a single bullet to the head. Police said he was dead on arrival at the hospital.

Four other people were hurt in the afternoon attack — two women and two men. Three were inside the barber shop, but according to an 88th Precinct source, one man was struck by an errant bullet while waiting for a bus on Fulton Street. They were taken to Bellevue and Kings County hospitals.

The store’s owner was one of the victims. She was shot in the leg.

Another victim was a 41-year-old off-duty police officer getting her hair cut in the salon, which is between South Portland Avenue and South Oxford Street at 1:50 pm. The officer, who works out of the 76th Precinct stationhouse on Union Street in Carroll Gardens, was shot in the foot.

All of the wounded were in stable condition, police said.

The midday murder turned the heart of Fort Greene into a media circus, but 15 years ago, when crimes rates were much higher in this precinct, such an event would barely have registered as a blip on the city’s radar.

Compared to 1993, for example, there has been 72 percent less crime this year. And, overall, murder is down more than 85 percent since that year.

The gunmen are at large, despite a major police presence on Monday that occupied two blocks of Fulton Street and shut down to all traffic and pedestrians.

There were no reports of damage from the hail of bullets. Police had located at least 12 shell casings on Fulton Street.

Councilwoman Letitia James (D–Fort Greene) was part of the crowd of 150 that gathered near the crime scene.

She said she had learned the shooting was not a random act of violence.

“It was a revenge killing,” said James, who has been calling for greater police coverage in the neighborhood, which has seen an uptick in non-violent crime this year.

The salon’s clients include the rapper Common, who had his hair cut a few hours before the shooting, the New York Times reported, quoting a record company spokeswoman.

On Tuesday morning there were still signs of the gunfight a day earlier. Discarded police tape was strewn along the streets and a cop car was parked directly in front the De lux Gallery. The salon’s front door was ajar, but the store was not open for business.

Employees of Greene Community Pharmacy next door to the barbershop were talking about the violence.

“Who could imagine that happening around here?” said a clerk from Bedford Stuyvesant who did not want to give her name, “but it proves you’re never totally safe.” Officers fanned out to investigate a hit in broad daylight on Monday at the De Lux salon on Fulton Street in the heart Fort Greene. Five people were also injured in the shooting spree. The gunmen remain at large.
The Brooklyn Paper / Tom Callan