From China, with love: Sunset Park Chinatown to get ornate arch as gift from Asian nation 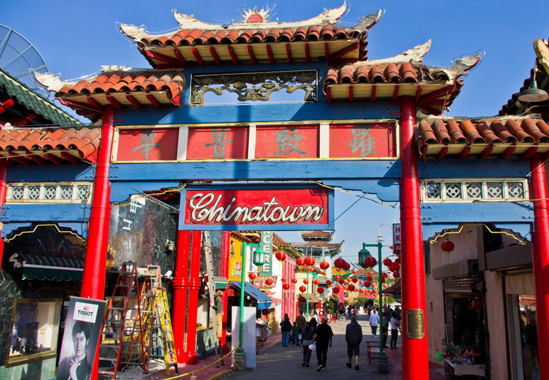 City of Angels: Los Angeles is also home to a gate at the entrance of its Chinatown.
Antoine Taveneaux / Creative Commons

Call it a gateway to friendship.

Mayor De Blasio announced on Friday that the city will finally get its first-ever Chinese archway designating the entrance to Sunset Park’s Chinatown neighborhood, on Eighth Avenue between 60th and 61st streets. The archway, which will be installed within the next few years, will be a gift from Beijing’s Chaoyang District and its placement underscores the importance of the cultural enclave, the mayor said.

“In Brooklyn, this Chinese community has grown to such an extraordinary extent, and Sunset Park and the surrounding area now have a major — global, in fact — Chinese community,” the mayor said at the unveiling. “This was the right place, on Eighth Avenue, to have this arch.”

The 40-foot-tall “friendship archway” will sit close to one of the borders of Brooklyn’s Chinatown, which spans Eighth Avenue between 42nd and 68th streets.

The archway’s twin pillars will be decorated with indigo-blue glazed tiles and classic Chinese designs, including a golden dragon and a revolving floral motif, and topped with an ornately tiled, nine-section roof. The middle beam of the arch will have a Chinese inscription, meaning “one family over four seas,” and an English one marking the connection between Brooklyn, the largest borough in New York City, and Chaoyang, the largest district of Beijing.

Former Borough President Marty Markowitz first unveiled plans for the arch in 2013, and Community Board 7 endorsed the plan in 2015. The city’s Public Design Commission finally approved the archway’s design this past July. The Department of Transportation will manage its installation.

In China, such ornate archways traditionally stand at significant sites — such as temples, tombs, and government offices — as well as at the entry points to major urban streets. And in many American cities — including Boston, Philadelphia, Los Angeles, Seattle, and San Francisco — similar archways mark their own Chinatowns, but Sunset Park’s will be New York City’s first, even though the distant isle of Manhattan’s Little Fuzhou neighborhood on the Lower East Side is the city’s oldest Chinese community.

“It’s a classic only-in-New York, only-in-Brooklyn moment that we have an Italian-American, African-American, and Mexican-American unveiling a Chinese arch,” Hizzoner said, referring to himself, Adams and Menchaca. City of Brotherly Love: Philadelphia’s gate to Chinatown, on N. 10th Street, is also known as the “Friendship Gate.”
Beyond My Ken / Creative Commons Beantown: Boston’s Chinatown gate is subdued in color compared to others around the country.
Ingfbruno / Creative Commons Gateway to friendship: The mayor announced on Friday that the city will get its first-ever Chinese archway in Brooklyn’s first Chinatown neighborhood, in Sunset Park on Eighth Avenue between 60th and 61st streets.
Photo by Caleb Caldwell