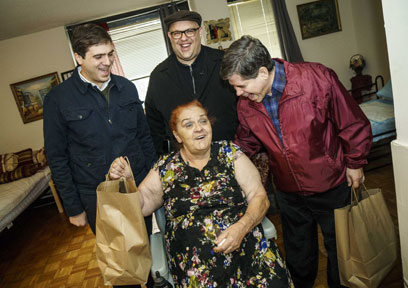 Home-bound seniors have a chance to get a free Thanksgiving meal delivered to their doorsteps this holiday — and there’s still time to sign up!

Volunteer group Bay Ridge Cares will bring turkey dinners with traditional fixings to those who are spending the day alone or who are unable to craft the meal themselves due to illness or disability. It’s a gesture that will bring cheer to a day that can otherwise be melancholy for people who have no one to get festive with, according to a co-founder of the do-gooder group.

“Hunger and being alone can be a very private or embarrassing thing that people don’t want to admit,” said Justin Brannan. “We’re here to show that you’re not in this alone, and that we’re here for you. When we deliver a meal we don’t just leave, we have a conversation we check in with them. It’s not just delivering the meal, it’s building relationships.”

About 20 volunteers will deliver holiday staples including stuffing, cranberry sauce, and mashed potatoes on Thanksgiving. Last year Bay Ridge Cares cooked and delivered more than two-dozen dishes, but this year the do-gooders are buying the dinners from local caterer Mejlander & Mulgannon with the aim of doubling its deliveries.

And spreading the word to those without family or who have difficulty getting around can be tough, because they tend to stay home and are not active on the Internet or social media. It’s a difficult barrier to overcome, so Bay Ridge Cares has been reaching out to senior centers and asking for help from local media to get the word out, he said.

The group has also partnered with local pols who work to alert residents. Councilman Vincent Gentile (D-Bay Ridge) will deliver meals with Bay Ridge Cares come Turkey Day and will also deliver frozen birds to senior centers in the district ahead of the holiday. It’s an important time to give back, the Councilman said.

To request a Thanksgiving meal or to volunteer to deliver the dinners message bayridgecares@gmail.com.