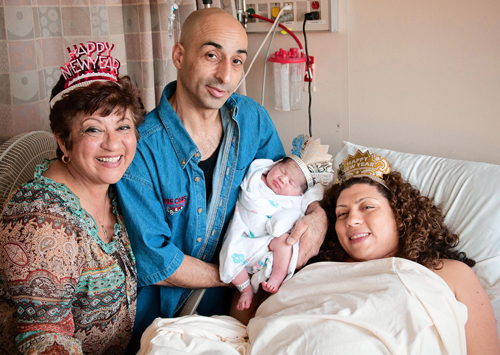 She was born to be a star!

Gorgeous Greenpoint baby girl Monika Sieminska stole the spotlight from the ball drop at Times Square on Jan. 1 when she became one of two infants in the city to be born precisely at the stroke of midnight.

Brooklyn’s raven-haired ravisher — blissfully unaware that she was jockeying with an infant girl from the Bronx for the title of Gotham’s first newborn of 2012 — arrived to plenty of hootin’ and hollerin’ at Maimonides Medical Center where she gently tipped the scales at 5-pounds-8 and embraced her new stardom by snoozing peacefully in the arms of jubilant mom Monika, 28, while doting dad Mariusz, 33, hovered tenderly over them.

The precious tot is the first child for the Polish immigrant couple and her awesome arrival is to rave for, says the family.

“It’s something special when I hold her!” beamed the proud mommy.

Lil’ Monika’s timely entrance created quite a stir at the Borough Park hospital, where she was the first new year baby on record to stick to such a punctual schedule, according to a spokeswoman.

“We’ve never had one born exactly at midnight — the mood was extremely festive!” said Eileen Tynion.

A few miles away at Kings County Hospital Center, Brownsville mom-and-dad Shanique Hollis and Lamont Greene also had reason to pop the cork! They rang in the New Year by welcoming their 5-pounds-6-ounces of cuteness — a baby boy yet to be named — as the clock struck 1:07 am. A half hour later in East Flatbush, New Year’s Day festivities continued in full swing at SUNY Downstate Medical Center where Crown Heights resident Magdala Lataillac had workers high-fiving and fist-pumping after she gave birth at 1:58 am to the hospital’s first infant of the year — a beautiful, bouncing boy weighing in at 8-pounds-10, named David.

Father Time turned his attention next to Long Island College Hospital in Brooklyn Heights where doe-eyed Madison Grace Molina made her dazzling, 10-pounds-4 debut at 3:25 am, becoming the year’s first baby there, and delivering glad tidings of the season to her thrilled parents — mom Melissa and dad James.

“My daughter’s birthday will always be the most beautiful way to ring in the New Year!” said the overjoyed mother who placed a princess hat on her pint-sized poppet to crown the special moment.

Delighted maternity staff pampered the family — which hails from the Columbia Street Waterfront District — with a multi-course meal served by a waiter in a tux, followed by a care package of goodies to take home.

At New York Methodist Hospital in Park Slope, Bensonhurst mom-and-dad Richard and Myra Moran also received the best gift they could ask for: the birth of their first child. Dreamy Richard Michael Moran was delivered at 7:42 am, promptly greeting the fuss over his festive birth with a big burp.

We congratulate all of Brooklyn’s 2012 babies, and their moms and dads, all of whom received gifts from their respective hospitals — and all of whom are doing exceedingly well, we’re told.