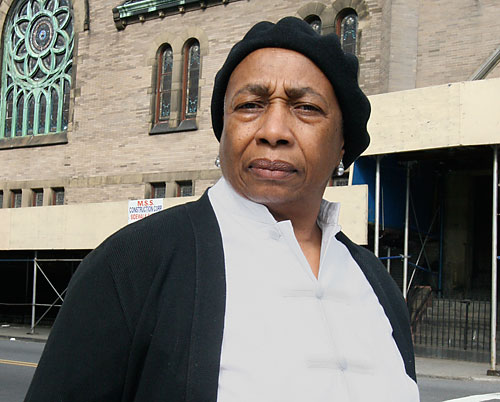 Muriel Tillinghast is a former leader of the congregation at the now homeless Bethlehem Lutheran Church — and a controversial figure in her own right.
The Brooklyn Paper / Bess Adler

The battle between the congregation at Bethlehem Lutheran Church and the church’s governing body could soon shift from the kingdom of heaven to a New York court.

The dwindling congregation at the shuttered Boerum Hill church has started raising money to sue the Metropolitan New York Synod to force it to return the church building on Pacific Street to the local group and let it reopen for spiritual business.

The problem: The Synod, which oversees 210 Evangelical Lutheran churches in New York, obtained the deed to Bethlehem in an internal church struggle last January and kicked out the congregation.

Worse, the Synod de-sanctified Bethlehem Lutheran as a church.

“I was shocked when they came out and said Bethlehem Church no long exists,” said Muriel Tillinghast, who was president of the congregation. “We existed before the Synod existed.”

The church has stood at 490 Pacific St. since 1874. Built by the Swedish Lutheran community, the 1,250-seat house of worship acted as a cultural center for Swedish immigrants. At the time of its closing, less then 40 people were affiliated. Today, that number is down to 27 active members, who pray in exile at the Zion German Evangelical Lutheran Church in Brooklyn Heights.

Tillinghast said that the church’s declining membership was the reason that the Synod shut it down in January, but newly appointed assistant pastor Norman David said it was all about money.

So now, he’s planning the lawsuit — a process with which he is well acquainted.

In fact, David hooked up with the Bethlehem congregation because the same thing happened at his own parish in Beaumont, Mass., where he still lives and preaches when not working at Bethlehem.

“We would love to have the Synod come around and say, ‘Look, we are sorry. Here is the property. Let’s work together.’”

The Synod would not comment on the matter because “it’s under litigation,” a spokesman said.

Meanwhile, David is raising money. A couple Saturdays ago, he organized a fundraiser for the church and held a service outside the building’s locked doors, turning over a trash can, draping a white cloth over it, and offering sacrament. Despite the rain, the Bethlehem parishioners sang hymns and held a full service.

“We are still here, even if we are locked out of the building,” he said. The congregation at Bethlehem Lutheran Church at 490 Pacific St. in Boerum Hill remains homeless, thanks to a dispute with the Lutheran governing body.
The Brooklyn Paper / Kate Emerson