Holy crap! Prospect Park was even worse THIS weekend! 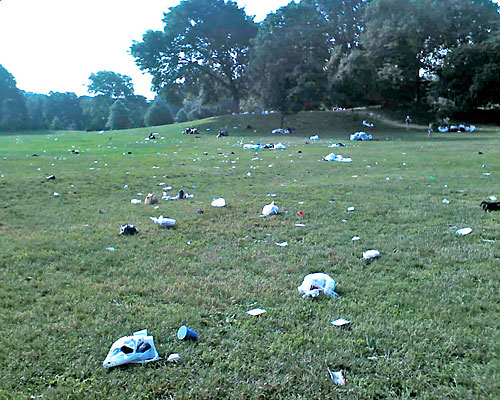 Just two weeks after an Independence Day weekend garbage debacle in Prospect Park, the Long Meadow was left for dead on Sunday after a huge — and apparently illegal — gathering.

Park lovers flooded our Inbox with pictures and filled our voicemail with concerned calls this morning after finding the Long Meadow positively unusable.

“A group called MIH Ventures had its ninth annual ‘Heatwave’ barbecue and left the place an appalling mess,” wrote one tipster. “It looked like no one did anything to clean up. By 9 am, the Parks Department had not even come.”

Another park user called to complain.

“I’m appalled,” said this caller, who requested anonymity because she is a park volunteer. “I’ve never see it like this. It was a blanket of trash. This was some serious irresponsibility, not your usual weekend of picnic.”

A spokesman for the Prospect Park Alliance said that the organizers of the “Heatwave” event did not have a permit for such a large gathering, making it impossible for Prospect Park officials to know that such a big event was happening.

“It’s enough work just to clean up after all the permitted events!” said the spokesman, Eugene Patron.

City rules require a permit for any event that is expected to draw more than 25 people, he said.

“But in this case, there were hundreds,” Patron said. “There are pictures on Twitter!”

Though Patron said that city officials and Parks workers did not know about the event in advance, plenty of people did. MIH Ventures sent out an electronic invitation via Evite days earlier and promised a party that would be “the outdoor event of the summer.”

“For eight years straight, MIH Ventures has hosted the premiere event of the summer, as we bring together patrons, clients, associates, friends and family for a day in the park,” this year’s invitation read. “Last year, we had over 1,000 people bless us with their presence and as we continue to grow, so does the size of the event. This year we expect nothing but more beautiful faces, food, and fun.

“We’re taking over Prospect Park…are you with us!?!” it added.

Readers have been especially keyed in to the sorry state of Prospect Park this summer after a series of stories in The Brooklyn Paper have alerted the public to the ongoing trash problem.

MIH Ventures did not return a call and an e-mail message before The Brooklyn Paper’s squeaky clean online deadline.