If a building falls in Brooklyn, it makes a tree grow A rendering of the new School Settlement Center.

A tree might soon grow in Brooklyn, but only if a building once frequented by the author of “A Tree Grows in Brooklyn” bites the dust.

Neighbors are more upset about the noise and dust the impending demolition of the 113-year-old Jackson Street Settlement House will kick up than the fact that legendary Kings County novelist Betty Smith taught sewing to the kids of immigrants there or that the Williamsburg institution made an appearance in her famous first novel.

“They are going to tear up the shingles of my house and my family is going to be disrupted,” said Phil Montana, who lives next door on Manhattan Avenue. “I do not think it is necessary.”

The School Settlement Association wants to bulldoze the three-story building to make way for a new structure to house the programs it wants to add for Williamsburg and Greenpoint youngsters, which it says the current structure cannot accommodate, 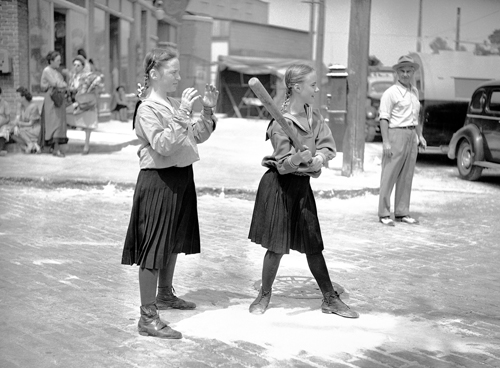 Different times: Peggy Ann Garner, at bat, and her stand-in play ball during a break in filming the 1945 movie adaptation of “A Tree Grows in Brooklyn.” School Settlement management says ts Jackson Street hub is too cramped for sports.
Associated Press

“We realize that, going forward, this building is un-sustainable for hosting the kind of programming this community needs,” said Greg Hanlon, spokesman for the Association partner Saint Nicks Alliance.

The center hosts after-school and summer-camp programs featuring activities such as basketball, theater, and prepping kids to write the next Great American Novel, but it is too cramped for the organization’s needs, Hanlon said.

For instance, the current facility’s gym has a low ceiling that puts a damper on long-range basketball shots, he said.

“Though people have heroically made it playable, we can do a lot better,” Hanlon said. Uprooted: The School Settlement Association wants to tear down its building despite its place in literary lore.
Photo by Stefano Giovannini

Outside the replacement center, the School Settlement Association plans to plant a Tree of Heaven. The type serves as a symbol for perseverance amid constraints in Smith’s seminal tome, in which the protagonist enrolls in evening sewing and dance classes as a rapidly maturing teen. The fast-growing deciduous tree is an import from China and its nicknames include “tree from hell” and “ghetto palm” for its foul smell and its ability to proliferate in harsh urban environments with the help of a rapid seed dissemination mechanism and an aggressive root system that poisons the soil to keep out other plants.

Tearing down the piece of literary lore and building a new, four-story community center in its place will cost approximately $18 million, according to Hanlon. Saint Nicks has been fund-raising for a year to meet the goal.

The current structure, which was built in 1901, is not landmarked or in a designated historic district. Invasive invite: Honchos at the kids community center want to plant a tree of heaven to mark the spot where Betty Smith once helped out.
Wikimedia Commons / Darkone