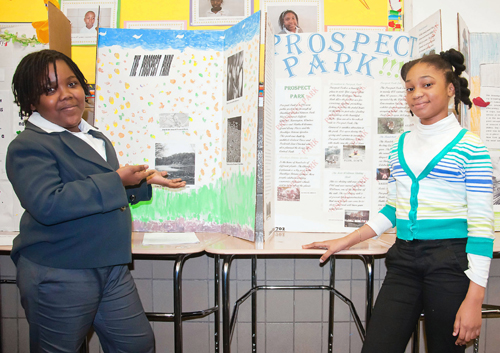 Eleven-year-olds Takeisha Casimi (left) and Ezinma Dennis chose to research the history of Prospect Park for their contribution to the “Museum of Brooklyn History,” a class project at the Fahari Academy Charter School in Flatbush.
Photo by Stefano Giovannini

When a group of middle-schoolers think of Brooklyn, they have moguls on their minds.

Two rags-to-riches businessmen — who eventually moved out of the borough — were some of the most popular choices for seventh graders at the Fahari Academy Charter School in Flatbush when they chose subjects for their “Museum of Brooklyn History” last week.

Both rapper Jay-Z and Starbucks CEO Dan Shultz grew up in the borough — Jay-Z in Bedford-Stuyvesant, Shultz in Canarsie — and both went on to accrue hundreds of millions of dollars in net worth, but Jay seemed to be the popularity king in the classroom.

“We had six or seven people do Jay-Z” said Marcia Tineo, who teaches humanities for the class. “I think the appeal was his identity as an entrepreneur combined with all the things that he’s done his personal life, like his charity work.”

In addition to the local moguls, students could choose from 17 other subjects for their projects, such as the Brooklyn Bridge and the Navy Yard, or come up with their own. The project included making short documentaries and poster boards to display for visitors.

The kids were overjoyed with the Brooklyn-centric project, Tineo says, and even showed up on weekends to finish it in time for the unveiling last Monday.

“I’m always like, ‘Here’s something about Queens!’ ” said Tineo, who grew up in that other borough, and still lives there. “But the kids never want to hear it.” 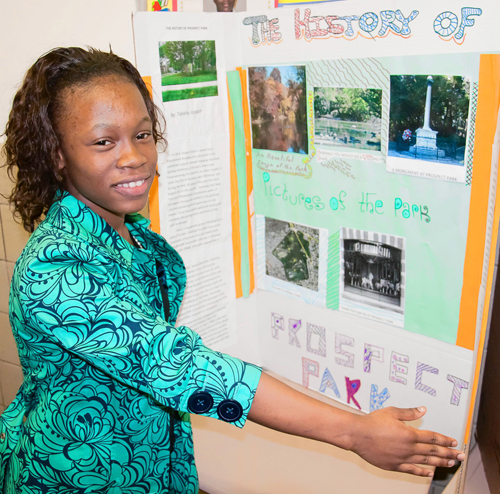 Twelve-year-old Telisha Joseph researched the history of Prospect Park for her item in the “Museum of Brooklyn History.”
Photo by Stefano Giovannini