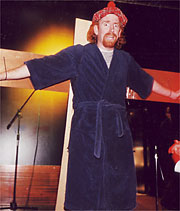 Barbes isn't only known for jazz: Here's a scene from the Blowhole Theater Marathon back in 2006.

Brooklyn is the city’s new jazz epicenter — and two Park Slope venues are part of the reason why, according to the Utne Reader, a literary journal.

The magazine specifically gave shout-outs to the Tea Lounge — the one on Union Street near Seventh Avenue, not the one on Seventh Avenue that just closed — and Barbès, the vest-pocket club near the corner of Ninth Street and Sixth Avenue.

These factors are “starting to give the borough the kind of reputation for jazz that SoHo and [Greenwich] Village once had,” the magazine wrote.

If by “reputation” the magazine means “in your lap,” than the tribute to Barbes is well-earned. The Frenchy club is so small that performers are literally in the audience’s face. When a band like the 12-member Life in a Blender performs, fans are often called upon to pass drinks to the stage. And when blues legend Danny Kalb performed there earlier this year, audience members didn’t have to shout out their favorite songs for Kalb to play; they barely had to whisper.

The scene has gotten so organized that three years ago, a group of musicians created the Brooklyn Jazz Underground to help each other book tours, market their music, and record their work.

Or as longtime jazz musician Joel Frahm, who just moved to Brooklyn, told the magazine: “Brooklyn feels like Manhattan used to feel when I first moved to town.”