McMahon in the middle 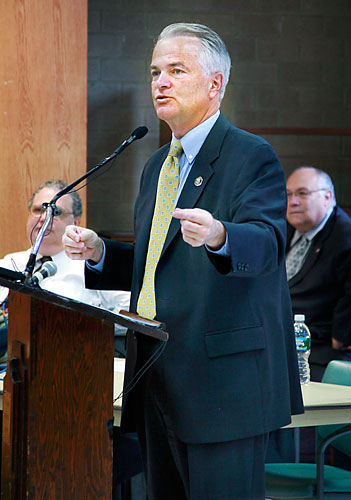 A survey of members of Congress revealed last week that freshman Rep. Mike McMahon’s voting record puts him squarely in the center of American politics — but a closer analysis of the congressman’s votes reveals that he’s not a classic centrist, but a lawmaker who votes with his party’s liberal wing plenty of times, yet also sides with conservative Republicans on many of that party’s signature issues.

The National Journal’s annual ranking of lawmakers put McMahon at the dead center of its liberal-conservative spectrum, based on McMahon’s votes on 92 “key congressional roll-call votes” in 2009 — the Bay Ridge Democrat’s first year in the House.

After McMahon’s office touted the National Journal report in a press release — “McMahon Named Most Centrist Member in U.S. House of Representatives,” the release was headlined — The Brooklyn Paper conducted its own analysis of the votes and quickly saw that the term “most centrist member of Congress” doesn’t really capture McMahon’s record. For example, McMahon:

• voted against the Democratic majority to tax Wall Street bonuses at 90 percent, a bill that passed 328-93.

• voted with the Republican minority against a cap on executive pay at companies receiving bailout money.

• voted with the GOP against the House health care bill.

• voted against his party in its bid to delay repeal of the estate tax and its bill to allow bankruptcy judges to modify mortgage terms.

• voted with the Republicans to bar federal funds for needle-exchange programs.

• consistently voted with Republicans on the purchase of new weapons systems, even one bill that would finance the tools of war through commensurate cuts in environmental clean-ups.

• voted with the GOP to bar the release of photos showing the abuse of American detainees.

• rejected Democratic leaders’ call for the Pentagon to detail its “exit strategies” from both Iraq and Afghanistan.

Yet at the same time, McMahon voted for some major social and economic legislation that bear the stamp of his party’s liberal wing, including expansion of a children’s health care program; the $819-billion federal stimulus package; the “cap and trade” emissions tax; improvements in food safety inspections; support for solar technology; regulations for the financial services industry; requiring companies to justify disparities in male-female pay; allowing the Food and Drug Administration to regulate tobacco; expanding hate crimes to include gender identity, sex orientation or disability; allowing the District of Columbia to keep abortion legal; and allowing federal health plans to cover abortion.

So what is he? A Democrat? A Republican? A fairly left-of-center guy doing his best to represent a cross-harbor district that voted for George W. Bush in 2004 and John McCain in 2008?

“The voting shows simply that I’m not driven by ideology, but by a common-sense approach for my district,” McMahon said. “People didn’t send me to Washington to promote one ideology or the other. On every bill, I try to represent the district. If that lands me in the middle, so be it.”

On military issues, though, it lands McMahon on the far right of his party. Explaining his support for expensive new weapons systems, McMahon did not sound like a New York City Democrat.

“If you look at those systems, they were geared toward defending Europe and our allies against Iran,” he said. “If you’re talking about missile-defense systems in Eastern Europe, I support that.”

At the same time, he staunchly opposed the release of photographs that appeared to depict American soldiers abusing prisoners in Iraq.

“Photos like that can be used by the critics of America to discredit the military and undermine national security,” he said. “Releasing those photos could paint the military in a bad light.”

When reminded that the soldiers in the photos were the ones guilty of discrediting the military, McMahon said, “We need to address any abuses that occur and not overuse interrogation procedures that harm people, but releasing such photos is just a bad idea. Everything the military does should not be open to public scrutiny. We are at war.”

He also voted to deny the transfer of prisoners at Guantanamo Bay to the United States for trials. A spokeswoman for the congressman said that he favors military tribunals for Gitmo prisoners outside the United States, but McMahon told The Brooklyn Paper that he has deferred to the Obama Administration on how it chooses to “bring these animals to justice.”

One one social issue, McMahon could be accused of flip-flopping: needle exchange programs.

In the City Council, he supported them. As a congressman, he voted against them.

“I don’t have a philosophical problem with needle-exchange programs, which is why I supported them in the Council,” he said. “But the federal government should leave programs like that, or a woman’s right to choose, to localities. We have a Constitution that gives certain rights to localities, and those governments should look at what is best for those communities.”

It’s important to point out that despite these anomalies, McMahon is a reliable Democratic vote, joining his party more than 90 percent of the time. But the times when he crosses the aisle are notable, given Washington’s supposed partisan climate.

“I’m not an ideologue,” he said. “An ideologue would say, for example, ‘Let’s tie the hands of the military.’ I don’t say that. I look at the circumstances of each bill and vote in a common-sense way, a way that my district would want me to vote.”