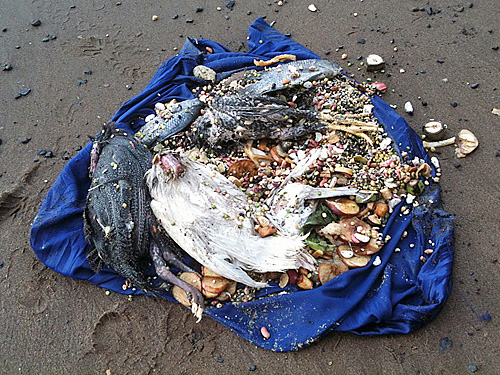 A Santeria-style shocker has washed up on the shores of DUMBO — a bag full of dead birds, fish, food and even some cash!

“I was so horrified,” said Harris. “I’m a photographer — normally I would go get my tripod and come back and shoot it. But this time I was so taken aback, I took a few pictures with my iPhone and fled.”

Harris believes that the latest incident may be linked to our ongoing coverage of the injured Cayuga duck in Prospect Park, the latest in a months-long saga of mysterious happenings in the natural area that includes dumped chicken heads and intestines along the lakefront.

“I read about the wounded duck and thought, ‘This is a part of the puzzle of what is going on over there,’ ” he said, adding that he was so grossed out he didn’t even take the $6 from the bag.

The connection to Santeria seems clearer in the current incident — though a scholar was hesitant to declare that the sack of spooky stuff was without a doubt an example of the syncretic religion.

“I don’t want to jump to the conclusion that anytime there is a dead animal in a bag, it’s Santeria,” said Miguel de la Torre, a professor at the Iliff School of Theology in Denver. “Many times there are copycats who don’t understand the religious traditions and copy traditions they don’t understand.”

Birds are not typically decapitated, he said.

“If you make a sacrifice, you sacrifice the whole animal,” he said. “The only time you cut the animal is if you’re going to eat it.”

Worse, a blue bag corresponds to a different god — Yamaya, of course. This offering should have been in a yellow bag, for the goddess Ochun, the lustful, flirtatious deity.

The scholar also had no explanation for the cash.

“Copper pennies are more typical for Ochún,” he said. “But someone could be making an offering by throwing a few bucks in there.”

This is far from the first time an unsettling Santeria discovery has shocked a gentrified neighborhood. Just last year, a severed pig’s head left outside of Green-Wood Cemetery along with candles.

Harris, for his part, was all for freedom of religion, he just preferred that such practices be kept indoors.

“If you’re going to do these things to these animals that’s one thing,” Harris said. “But don’t throw it somewhere where kids will see it by the playground!”