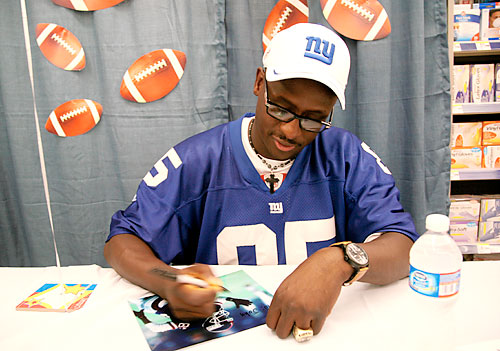 A TRUE GIANT: Stephen Baker, who ran for 2,587 yards in his six seasons as a Giant, signed autographs at Walgreens on 95th Street and Third Avenue after getting his flu shots.
Photo by Bess Adler

He may have run for 2,587 yards in his 52 starts and completed 21 touchdowns, but even former Giant Stephen Baker needs a little protection from the flu.

Baker “The Touchdown Maker” made a cameo at the Walgreens on 95th Street near Third Avenue on Tuesday to promote the pharmacy’s flu shot service.

“It was great to have Stephen Baker at Walgreens to kick off the 2011 to 2012 flu shot season,” said Frank Sorci, the store’s manager.

The appearance was part of the pharmacy’s initiative in which 20 NFL players get flu shots at various locations across New York City as the flu season gets underway.

The former pro gave up football in 1992 — one year after helping the Giants win the 1991 Super Bowl by catching a 14-yard pass for a touchdown. What a grip! Stephen Baker “The Touchdown Maker” presses the flesh at the 95th Street Walgreens.
Photo by Bess Adler