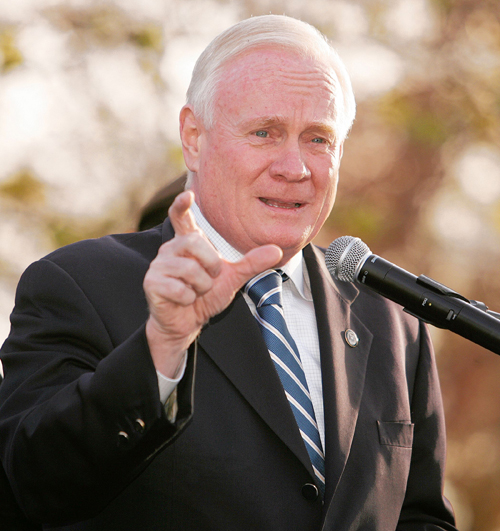 A lawyer for state Sen. Marty Golden’s nephew, who prosecutors say broke a Port Authority police officer’s jaw during a bloody Bay Ridge bar brawl, told a jury that the young man was just trying to pick up a girl when he got caught up in the fracas — a fight he claims was sparked by a rowdy off-duty cop who later tried to hide evidence of his guilt.

“[My client] was in the wrong place at the wrong time,” Arthur Aidala said of Daniel Golden, claiming that the legislator’s nephew was sober and chatting up a young woman when a fight broke out between his cousins and Paul Aparo, an off-duty police officer from the 77th Precinct in Crown Heights.

Aidala’s opening remarks came amid a full day of criticism against the NYPD’s investigation into the massive case, which involves three separate trials, nine lawyers and 32 jurors.

Prosecutors say Golden, cousins Kevin Crowley, Michael Crowley and John DeCarlo, and family friend Peter Jung all played a role in the drunken 2010 melee, where an off-duty Port Authority cop was viciously beaten and a firefighter was stabbed outside the Kettle Black bar on Third Avenue at 87th Street.

Yet the defense tells another story: Aparo and his fellow peace officers started the fight — then doctored the surveillance footage that could prove his guilt.

Defense attorney Michael Cibella said the Kettle Black surveillance tapes initially showed Aparo stampeding out of the bar “looking for blood,” but that minute-long scene wasn’t provided to the police. Jasmin Pontic, a high school friend of Aparo’s who works for the security company monitoring the Kettle Black’s cameras, deleted that segment before it was handed over to investigators, Cibella claims, adding that phone records prove Aparo called Pontic repeatedly hours after the brawl. Pontic was ultimately arrested for doctoring the footage.

Bouncers threw everyone outside, but, when McCarthy tried to jot down a defendant’s license plate number, DeCarlo, the son of an NYPD detective, allegedly slugged him, even though cops say McCarthy had his police shield out.

“I don’t give a f—k,” DeCarlo allegedly said as he and Golden allegedly pounded on Ryan, leaving him with a broken jaw. Attorneys for Golden's relatives say that the cops had the surveillance footage at the Kettle Black doctored to hide their involvement in the fisticuffs.
File photo by Peter Milo

Brooklyn DA Charles Hynes refused to take the case against Golden’s family claiming that the defendants’ connection to the law-and-order Republican legislator — a former cop — constituted a conflict of interest.

The case was passed off to Queens prosecutor Michael Brovner, who told jurors that Golden’s relatives instigated the fight that spilled out into the street.

“[Golden and his companions] weren’t out to have a good time, they were out to do whatever they wanted to do,” Brovner said. “They escalated and ramped up the situation.”

But the defense says that blood found on the Kevin Crowley’s knife does not match Cicero’s, and that the prosecution’s key witness admitted in an e-mail that she was too drunk and high to remember anything that happened.

Aidala said McCarthy mistakenly fingered Golden as his attacker in a lineup that took place days after the fight.

“Obviously, McCarthy was punched in the face, but not by Dan Golden,” said Aidala. “Dan Golden didn’t punch anyone in the face.”