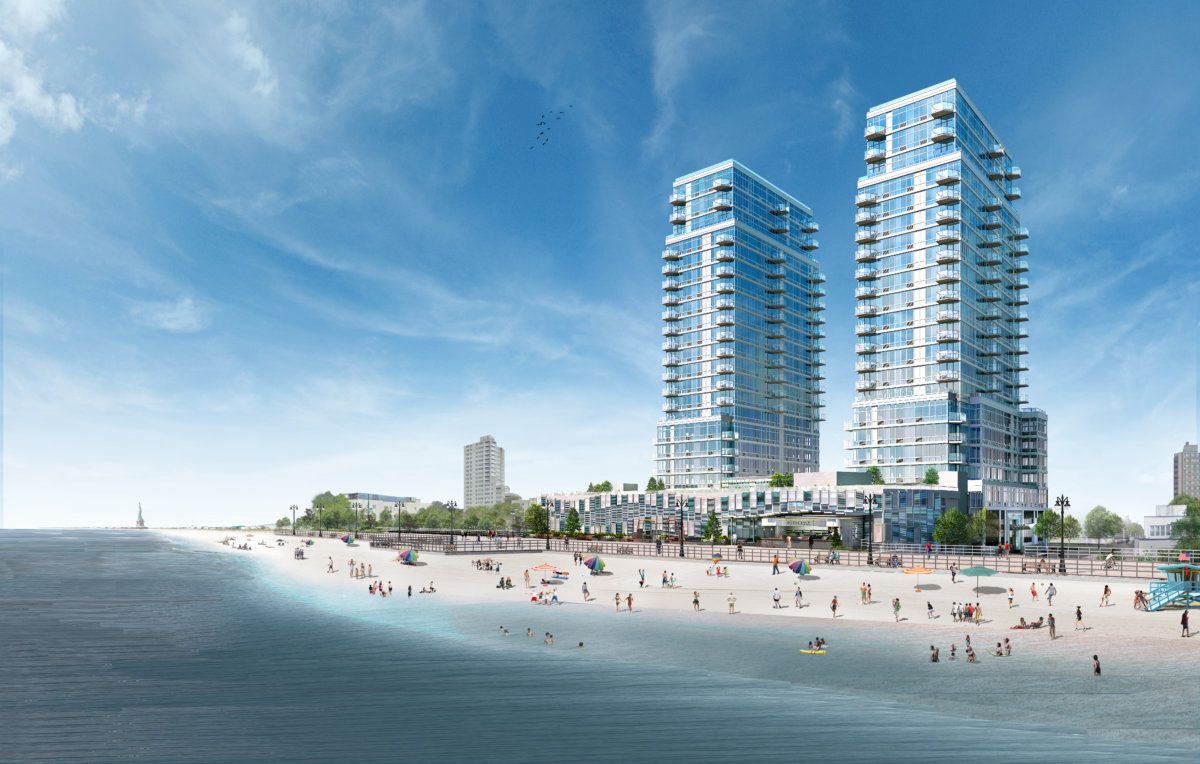 “We’ve planned to build three more buildings,” he told Brooklyn Paper. “The plans are in the works, and the virus is not affecting us. We’re waiting for the right time.”

The three upcoming towers will straddle the two existing buildings on W. 36 and W. 37th streets, which opened for leasing in January of 2020.

Ocean Drive, developed by Catsimatidis’ Red Apple Group, is Coney Island’s most luxurious apartment complex. The two-tower building boasts a 50-foot pool and a sundeck nearly the size of half a football field overlooking the Riegelmann Boardwalk. Most of the 425 apartments have a private balcony with a view of the ocean — thanks to the buildings’ V-shape — and residents can access the shared media lounge, children’s playroom, gym, and garage parking.

The glassy, 22-story skyscraper contrasts the majority working-class community on Coney Island’s west end. To the complex’s west is the gated community of Sea Gate, consisting of one- and two-story family homes, and on its eastern and northern sides are several public housing complexes and more affordable apartment buildings.

The building is a 23-minute walk from the closest subway station, but Ocean Drive residents can take a free trolley operated by the building to and from the terminal. The shuttle will also stop at the new Coney Island ferry terminal in Kaiser Park when the ferry starts running in 2021.

Catsimatidis said that Ocean Drive experienced a drop in leasing at the height of the coronavirus pandemic, particularly between March and July. But by offering concessions, such as one month of free rent, developers have helped get the numbers back up.

“All of a sudden in the last few months rentals have picked up a great deal,” he said. “I guess people want to get away possibly from the inner cities, and you breath in that ocean air, it’s virus free.”

October rental prices lined up with those offered in February, with a one bedroom leasing for $1,960 per month and a three-bedroom going for $4,200.

A Red Apple Group rep declined to disclose the current occupancy of the complex, but said that one of the towers is nearly full, and that developers will begin leasing apartments in the second tower soon.

“We’re about to open the second tower,” said Ralph Zirinsky.

The Red Apple Group already owns the lot directly east of the current complex, where it plans to build another building. Catsimatidis said he doesn’t have a timeline yet for construction, but emphasized that the plans for the expansion remain intact.

The ground floor of the upcoming buildings will probably house restaurants, Catsimatidis said.

“A lot of people are requesting that we put a bigger variety of restaurants,” he said.

The storefront on the boardwalk in front of the existing Ocean Drive building will most likely house an outdoor cafe by next spring, Zirinski added.