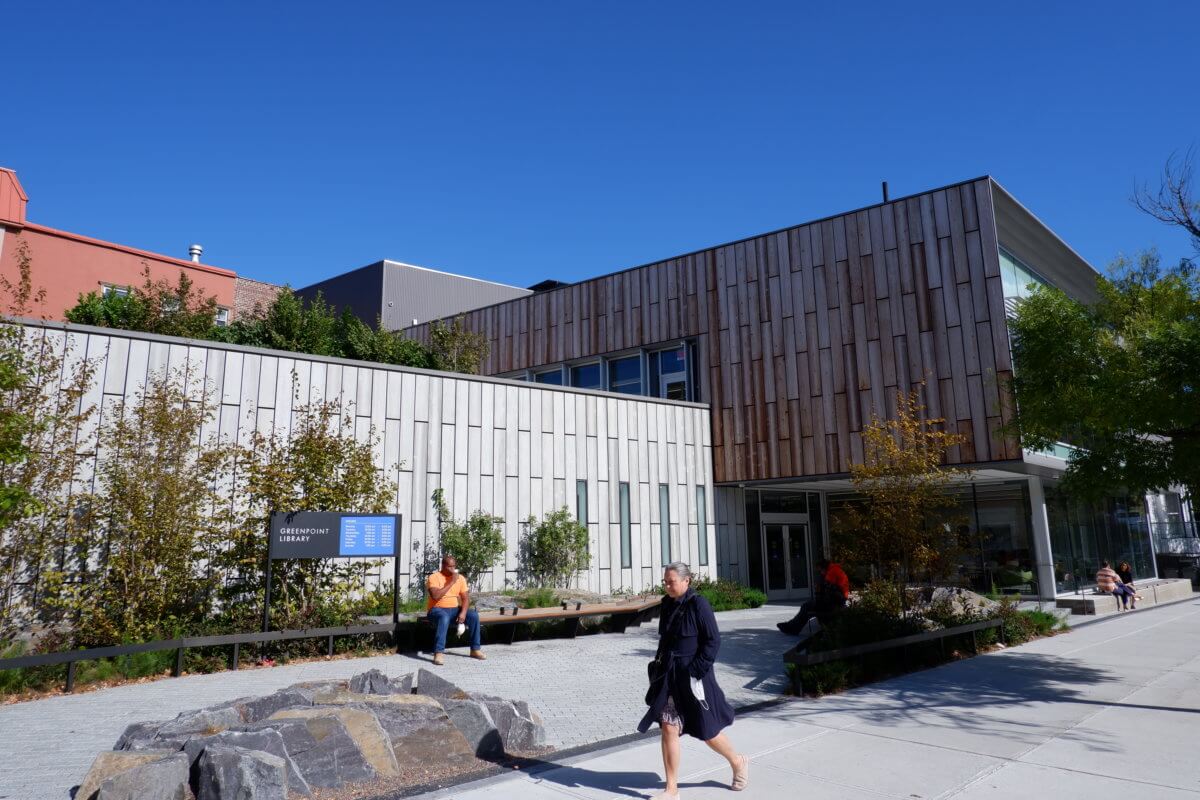 The Greenpoint Library at Norman Avenue and Leonard Street.
Photo by Kevin Duggan

“This beautiful new building is bright and modern with plenty of indoor and outdoor spaces to read and reflect or to meet your neighbors or to learn something new,” said Ames O’Neill, BPL’s project manager for the outpost’s revamp. “We hope Greenpoint Library will be a central gathering place for the neighborhood for generations to come.

The full-service book lender at the corner of Leonard Street opened its doors on Oct. 20 — with limited lobby service of drop-off and lending for now due to COVID-19 — after a more than three-year, $20 million reconstruction funded in part by Big Oil.

The 15,000 square-foot facility, designed by Dumbo architects Marble Fairbanks, is double the size of its one-story brick predecessor and provides more space in- and outdoors across two floors and a rooftop garden.

A plaza with benches fronts the building along with bioswales — planters and sloped pavers to help capture pollutants, while directing and draining rainwater runoff to lessen flooding.

The library has many more environmentally-friendly features, including floor-to-ceiling windows filling the rooms with natural light, solar panels that help power the building, and a rainwater cistern that captures up to 1,500 gallons — about 20 bathtubs worth — of rainwater to be used for labs and watering plants.

On the ground floor, a large children’s section provides ample space for neighborhood tots with a story time corner and play stations. The first floor also has a grown-up area lined with bookshelves and rows of tables with outlets on the far side.

Upstairs on the second floor, there are spacious lab areas, a section dedicated for teens with young adult books that doubles as a meeting room, along with an outdoor reading oasis that houses the water tank.

The rooftop — which will only be open for programming — hosts a pollinator garden with a hand pump connected to the water container.

The new library replaces the 1970s-era branch which borough book bigs closed and tore down in late 2017, having itself once replaced one of the borough’s first Carnegie libraries erected in 1906.

For the three-year construction project of the facility, some $5 million in funding came from a $19.5-million fine that oil-and-gas giant Exxon-Mobil paid the north Brooklyn community in 2014 after federal officials discovered that the company spilled 30-million gallons of oil into the Newtown Creek since the 1950s.

City and library capital funds paid for $14 million of the project, while another $1.8 million came from the state’s Education Department.

Completion for the project was initially slated for late 2018, but those plans were set back several times, including when workers found asbestos in the remains of the old Carnegie library in October 2018. City inspectors halted construction in 2019 due to workers failing to properly secure the site, and again this year when COVID hit.

While the new building’s many new amenities won’t be in action for now due to the pandemic, a spokeswoman for the library said they might hold outdoor programming on the ground floor space in the future.

“At all of our branches we’re thinking about how we can do outdoor programming. Maybe on the first level here might be our first target,” said Fritzi Bodenheimer.