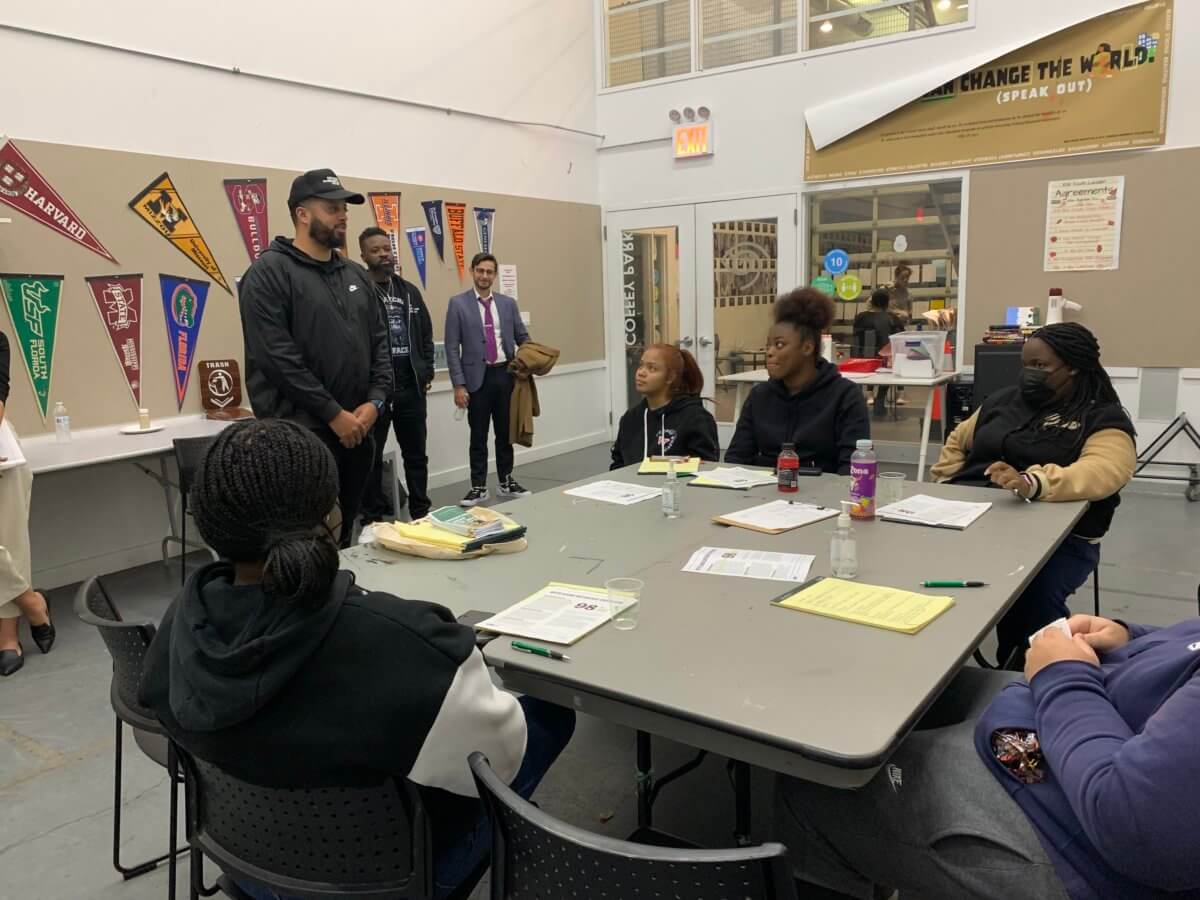 The Red Hook Initiative and the Legal Aid Society have partnered for the first-ever “Know Your Rights Ambassador Training Series,” which teaches teens how to navigate interactions with police and — most importantly — how to share that knowledge with their peers.
Photo courtesy the Legal Aid Society

Twice each week, as students settle in for after-school programs and study sessions at the Red Hook Initiative, a group of eight teenagers sit down for a new workshop. For two hours, the high school students learn about how to respond if a police officer stops them on the street, what their rights are, and how to protect themselves.

The three-month class is the first-ever Know Your Rights Ambassador Training Series, held in partnership with the Initiative and the Legal Aid Society. By the end of the year, the students will be ambassadors for the program — and will head out to facilitate Know Your Rights Workshops for their peers.

The goal, said Legal Aid Society community organizer Germain Thompson, is to give RHI youth not just the knowledge they need, but the ability to spread that information far and wide and into future generations.

“That’s why the training series is so intense – it’s from September to December — so they can actually have the full understanding of what a police encounter and their rights during a police encounter,” he said. “So they can fully understand the history of gang policing and how the gang database was formed.”

The Legal Aid Society has facilitated similar trainings before — but this is the first time they’re teaching young people how to become teachers themselves.

The two groups first connected and started planning the training series back in 2019, said Natisha Romain, Director of Adolescent Youth at the Red Hook Initiative. Some of the center’s youth had just had a negative encounter with the police, and the Legal Aid Society came in to do an information session.

“The young people were very responsive to it … and because our young people expressed interest, we were like, OK, let’s keep moving,” Romain said. “Let’s see where this can go.”

They had a few interest sessions in early 2020 and had plenty of youth interested in the program — but their plans were derailed by the pandemic. But the delay didn’t impact interest — so far, the response from the current participants has been great.

“It’s been a really great opportunity for young people to learn things that they are connecting to things that are happening in their neighborhood or happening with their friends, and they’re realizing this is a lack of information,” Romain said. “This is a lack of information that they’re seeing in our school system, where they literally have come to me and said, ‘I want my friends to know this.’”

“I’m like, don’t worry, you’re going to teach your friends!” she said.

‘You want to make sure that you are prepared’

Though the first information session was in response to a specific incident, Romain said the primary motivator for launching the training series was the realities the young people at RHI face in their neighborhood and the city at large. Heavy police surveillance of Black and brown children poses a danger to their safety, she explained.

After stop-and-frisk was deemed unconstitutional in 2013, a federal judge decided that an independent monitor would supervise the NYPD’s compliance with court orders. The most recent monitor’s report found that the police were underreporting stops and that there was a racial disparity in stops – more Black and Hispanic people are stopped than white.

“Waking up as a person of color, as a Black person, you have a concern that the police may approach you, and you want to make sure that you are prepared,” she said. “I’m in a place where I want my young people to be as prepared as I possibly can make them … I do that by providing them with opportunities for access to information.”

At the Red Hook Initiative Youth Ambassador workshops, Tuesdays are dedicated to discussing how to handle actual interactions with the police — walking through the steps of being stopped and asked for ID, being detained, and being arrested.

At the core of those conversations are the “six R’s” — don’t run, don’t reach or resist, remain silent, refuse searches, request an attorney, and refuse any food or drinks offered by law enforcement.

“We always say do not reach, because an officer may feel threatened if you start reaching and that may be cause for you to be shot, tasted, whatever the case may be,” Thompson said. “If an officer is asking to search you, refuse all searches, do not consent to the search.”

The final “R” — refuse all food and drinks — is an effort to keep an arrestee’s DNA out of law enforcement databases. If someone drinks out of a water bottle or smokes a cigarette and leaves it behind at the precinct or in the interrogation room, police may be able to pull their DNA from the item.

“This program has been good because I learned more about cops and NYPD’s systems and other things they may do to target Black and Brown people. This is important information because as a young adult, I have citizen rights and I know what to do when a cop may approach me,” said Carter, a RHI participant and youth ambassador.

On Thursdays, Thompson discusses New York City’s gang database. A tool the New York City Police Department has long defended, the database tracks all New Yorkers with gang affiliations — but critics say it’s all too easy to be added to the list.

Family members and neighbors of gang members may be added to the database based on proximity alone, according to a 2019 report by The Policing and Social Justice Project at Brooklyn College. The majority of the list is composed of people of color, and being in the database can mean harsher sentences for what would otherwise be a minor criminal charge.

Thompson impresses upon the youth in the program how easy it is to be added to the database and the effect it can have on their lives and interactions with cops. In 2014, the Legal Aid Society filed a Freedom of Information Act request for a list of people in the database.

The youngest person on the list was ten years old, Thompson said.

“Being ten years old, on the gang database, being watched by police officers and being investigated without a parent’s knowledge…that’s a big issue,” he said. “That’s why we feel like it’s important for us to spread this message, spread this word, educate people on the NYPD gang database.”

He also tells them to be careful on social media. Young people use social media as a form of expression — sharing music and art and details about their personal lives. Those details can unintentionally raise a red flag for police.

“We touch on safe ways to interact on social media, like watching things that you post, watching reciting rap lyrics and not knowing exactly what it means or not giving the author credit — stuff like that can be determined as your own words,” Thompson explained. “If you’re saying something that’s gang-related, it’s quite possible that the NYPD SMART Unit may flag you as a gang member.”

Perhaps the most important part of the program is that it trains the students how to host Know Your Rights workshops themselves — a first for the Legal Aid Society.

After the program wraps up, they’ll be paid to host workshops for their peers in schools and elsewhere as part of the Red Hook Initiative’s High School Youth Leaders program. The eight participants — who range in age from 16 to 18 — were a little nervous about the prospect of hosting the workshops themselves, Germain said, but they’ll practice in the group and get familiar with the process.

Just a month into the program, the students started talking about how they wanted to share what they learned with their family and friends, Germain recalled.

“They want to bring this information and content to their schools, they want to tell their friends,” she said. “At one point they were giving out pamphlets, they were like, ‘Miss, you should read this.’”

Thompson said he sometimes gets the students to connect with him and pay attention by recalling his own experiences getting arrested and losing one of his best friends in a gang shooting. Neither he nor Germain had the knowledge they’re imparting on the students when they were young.

“That’s one of the things that I always tell folks — if I had known what I know now, I probably wouldn’t have gotten into a lot of stuff I got into in the past,” he said. “That’s the importance of these workshops is to go into these communities and give that information because I know there’s folks out there who are blind to all of this like I was when I was their age.”