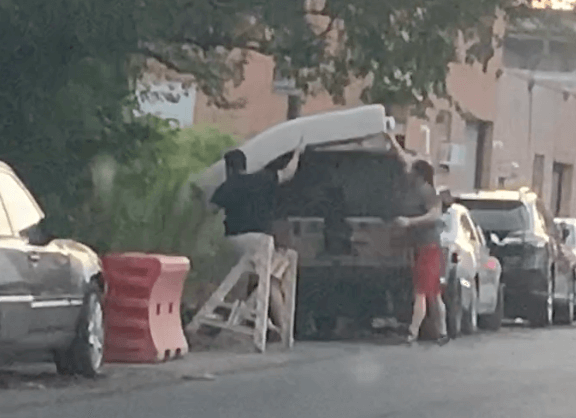 Giovanni and his husband were fined $4,000 each for dumping a mattress in Bensonhurst.
Photo courtesy of Giovanni

City garbage honchos fined a homeless couple $8,000 for illegally dumping a mattress on a Bensonhurst sidewalk on Aug. 18 — despite there being no legal alternative available.

“It’s definitely taking advantage of people who have no other option but to dump,” said Giovanni, who asked that his last name not be published. “It’s not like I wanted to do it. I was for months trying to avoid doing that.”

The lifelong Brooklyn resident and his husband, who asked not to be named, have been living in a 30-year-old RV in Brooklyn for nearly eight months after Giovanni left his job as a paramedic in October due to health issues — and he’s been finding difficulty landing a new, less strenuous gig.

“It’s very physical work and I couldn’t keep up with it anymore,” he said. “I couldn’t find any job after that within a reasonable amount of time so I borrowed some money from friends and I bought a 30-year-old RV.”

The couple tried to make the dated vehicle as comfortable as possible — but, with an extra mattress, the small space became overly cluttered, which was further compounded by the summer heat.

They tried donating the mattress, offering it to people on the street, posting it for free on Craigslist — but no matter what he did, he could not get rid of it.

“I had it for seven or eight months and I just didn’t know what to do with this mattress,” Giovanni said. “I tried bringing it to two different Salvation Armies… just nobody wanted it.”

And with no permanent city residence, he said the city’s special pick up services for large items, such as furniture and appliances, are not available to him and the rest of the city’s homeless population.

“I cannot call them and say ‘hey, my RV is located on this intersection… let me know when you are outside and I will bring this mattress to you,” Giovanni said. “Otherwise I would.”

When they finally dumped the mattress on Aug. 18, Giovanni said they chose a spot — 61st Street between 14th and 15th Avenues in Bensonhurst — that appeared to have been used by others for a similar purpose so they wouldn’t create litter in a new area.

But a Department of Sanitation officer observed the pair in the act, and slapped them each with the minimum fine of $4,000 and impounded his vehicle for illegally dumping, which is classified as throwing trash from a vehicle onto public or private property.

“I am still unsure as to whether he was following us or if he was there,” Giovanni said. “Regardless, after it was done within a minute I was pulled over.”

He suspects that most trash dumpers are also experiencing homelessness and argues the crime committed does not call for the steep fines imposed — which he was forced to pay to get his car back and is now being pushed further into poverty to pay back the money he owes to family and friends.

“I am aware that that is wrong, there is no denying that,” he said. “I just don’t feel that fine is appropriate for someone in my situation, especially given that most of the people who do engage in this are in my situation. Because why would they be doing that if they had a street address or the ability to call 311?”

They attended a hearing for the offense on Aug. 21 where the fines were upheld, but Giovanni is filing an appeal on the grounds of his allegation that he did not receive proper time to defend his position. He also claims the officer who oversaw his hearing refused to acknowledge he and his husband’s marriage and referred to them as partners.

A spokesperson for the Department of Sanitation said the lack of trash removal alternatives for the homeless has not been brought to the attention of the agency’s representatives, but they will work towards finding a solution for the future. She suggested options such as donating the item or dropping it off to a private wasteyard.

In other areas of the city, the Department of Sanitation officers have cracked down on illegal dumping issuing six summonses in Glendale, Queens over the span of two weeks, according to reporting from QNS.