She hits it out of the park: Volunteer honored as ‘Winning Woman’ • Brooklyn Paper

She hits it out of the park: Volunteer honored as ‘Winning Woman’ 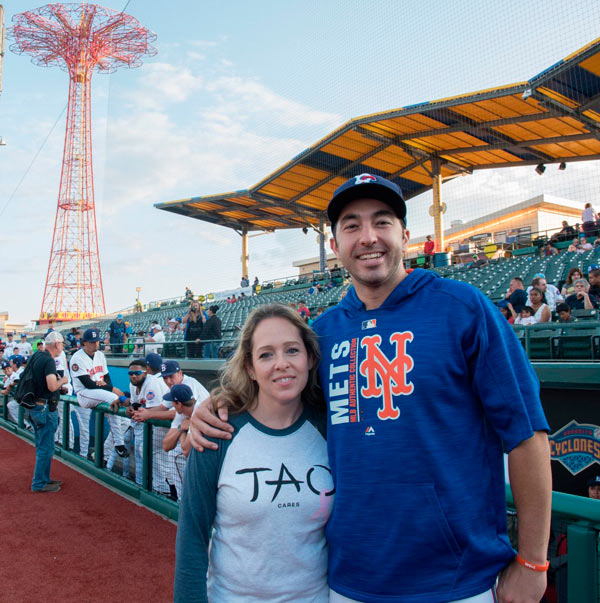 It’s a three-run homer for Judy Tepperberg. Our borough daughter was honored as a Winning Woman by Maimonides Medical Center and the Brooklyn Cyclones.

Members of the hospital — including Michael Brincat of Maimonides Cancer Center and Heshy Augenbaum, Maimonides Chief Development Officer; along with Brooklyn’s own royalty, King Henry, and Gary Perone, Brooklyn Cyclones Assistant General Manager — cheered Judy on as she threw out the ceremonial first pitch at MCU Park.

Judy, the daughter of a doctor who headed the Pediatrics Department at Maimonides Medical Center, and a mom who instilled the value of giving back to those in need, began to care about folks in her community long before her rise in the business world. Not only a partner in the internationally known TAO Group, a restaurant and entertainment company, she also takes the time to mentor young professionals as well as leads various charitable causes including Autism Speaks, Charity Water, Covenant House and the American Cancer Society.

As a result of her commitment to the community she became a driving force behind TAO Cares, the giving arm of the company, and expanded her family’s legacy of giving back.

The 5K run and walk commemorates the patriotic sacrifice and selfless courage of 9-11’s fallen heroes as well as FDNY firefighter Stephen Siller by retracing his final footsteps. The annual event has become an iconic tribute to not only the 343 firefighters, but all first responders, who selflessly laid down their lives that day.

Runners from across the globe are expected to participate in the event.

The Sephen Siller Foundation has raised more than $70 million for various initiatives and programs, including supporting our nation’s catastrophically injured service members through the Building for America’s Bravest program. Through the program, the Foundation builds custom smart homes for injured servicemen.

Highlights of this year’s run include:

• Concert featuring the West Point Benny Havens Band — in order to enjoy the concert, individuals must have a runner’s bib to gain entrance.

The Tunnel to Towers 5K Run and Walk is open to the public. Registration is required, and is opened online until Sept. 23 at 11:59 pm, or on race day at the IKEA parking lot from 7 to 9 am. Participants may purchase timing chips online only through Sept. 18. After Sept. 18 and through Sept. 23, a timing chip can only be obtained in person at any registration site. Timing chips are not available to those registering on race day.

The run starts at 9:30 am on the Brooklyn side of the Hugh L. Carey Tunnel. Due to construction in the tunnel, the run will begin along Richards Street, taking an immediate right onto Hamilton Avenue, then through the tunnel, north onto West Street, left onto Liberty Street, to Battery Park Esplanade, right (east) on Warren Street, right (south) onto West Street, and finish at West and Murray streets, across from the World Trade Center with one block as walk-off area to Vesey Street.