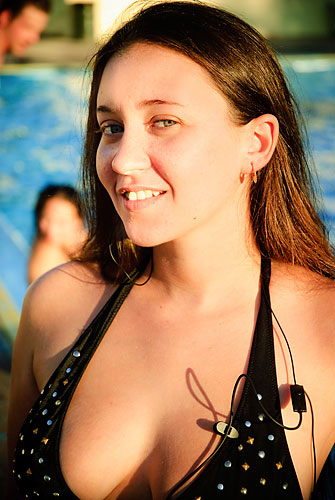 Stephanie Frangipane strikes a pose that earned her “Hottie of the Double-D” status this week.
Photo by Stefano Giovannini

It might have been her first time at the Douglass-Degraw Pool, but it certainly won’t be Stephanie Frangipane’s last dip.

It can’t be, not after she’s been named this week’s “Hottie of the Double-D!”

The gorgeous 24-year-old Ocean Parkway-born newcomer said she was blown away by the pool’s “low-key atmosphere” and “family environment” — something regulars have coveted for years.

With her new crown, Frangipane realizes that with great pool power comes great responsibility. But she’s already prepared to defend her now-favorite pool from any future attacks by City Hall, which threatened to drain the popular watering hole this summer — until we stepped in and led the fight to save it.

“There are not that many people who have the luxury of a pool in their homes,” she said. “Some people can’t afford air-conditioning. If the city isn’t making enough money, then they should come up with a different plan, but the pool should not be closed.”

When she’s not blasting city bean-counters, Frangipane works as a server at a Long Island restaurant, and in her spare time, enjoys swimming, handball, and — sorry, fellas — hanging out with her boyfriend.