Spike does the ‘Right Thing’ in DUMBO 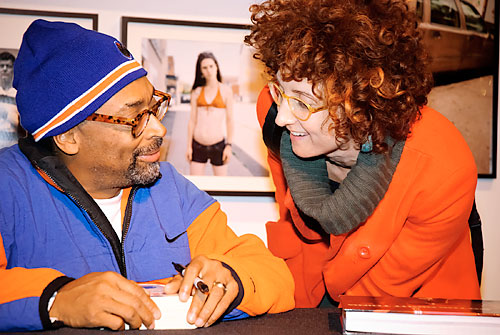 Filmmaker and one-time Brooklynite Spike Lee signed a copy of his “Do the Right Thing” photo book for Elena Cappanera on Thursday night at Powerhouse in DUMBO.
Photo by Stefano Giovannini

Stacey Chapman pinched herself to make sure that it actually was Hollywood heavyweight Spike Lee chatting with her at the powerHouse Arena in DUMBO on Thursday night.

The excited Crown Heights resident gave a fist-pump as she claimed one of the first autographed copies of the filmmaker, writer and actor’s new book, “Spike Lee: Do the Right Thing,” at his first book signing in the city.

“I grew up watching his movies and he inspired me to be in a creative industry,” said Chapman, one of hundreds who showed up at the Main Street book arena to buy a personalized book from Lee, the iconic former Brooklynite.

The book celebrates the 20th anniversary of the landmark film, featuring an insider’s look with behind-the-scenes visuals and interviews about a movie which stoked controversy at the time with its candid exploration of race and class relationships.

Lee, who attended John Dewey HS and whose production company 40 Acres and A Mule Filmworks remains based in Fort Greene, wrote the screenplay, produced, and even starred in the intensely personal film, boasting an all-star cast and Public Enemy’s bold soundtrack, which became a street and club anthem, “Fight the Power.”

All that said, Lee now lives in Manhattan.