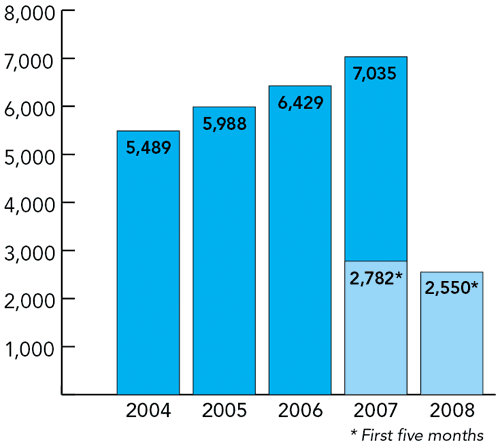 All our exes live in … Brooklyn? Yes, divorce cases are soaring in Kings County — up a whopping 30 percent since 2003.

The surge covers uncontested divorces — which numbered 5,489 in 2004 and jumped to 7,035 last year. Contested divorces — the ones that get ugly — are up five percent, according to Tom Kilfoyle, the clerk at the Adams Street courthouse.

And no one knows why. It’s certainly not Brooklyn’s population increase — which is only up two percent so far this decade.

Of course, there are several theories:

• Good times! The booming economy between 2003 and 2007 allowed dissatisfied couples to realize that they could now afford to break up.

“A healthy economy means steady traffic at the divorce court,” said Saul Edelstein, the dean of Brooklyn’s divorce bar, who has been rendering people asunder for more than 40 years.

• Bad times! Of course, when the economy tanks, so do many marriages. And the economy in the first five months of 2008 — when 2,550 marriages were dissolved in uncontested fashion — has been pretty bad.

“There tend to be more divorces during bad times,” said Donald Mastrodomenico, another legend of the Brooklyn divorce scene.

• More hate! Clearly, if divorces are surging, more and more Brooklynites are falling out of love.

But that fact doesn’t explain why there would be so many divorces all of a sudden.

“I really don’t think it’s because Brooklynites are hating each other more than before,” said Jeffrey Sunshine, the supervising judge for matrimonial matters in Kings County.

Instead, he credited his own courtroom for doing a better job than ever, right down to providing excellent service for couples who don’t have lawyers.

“We have a very active pro-se office and the word is getting out,” said Sunshine. “They don’t even take lunch most days.”

Couples can file uncontested divorces in any county, so if there’s a backlog in Manhattan or Queens, many may choose Brooklyn, Sunshine added.

“Brooklyn does do a better job than Queens,” Mastrodomenico said. (The clerk from the Queens and Manhattan divorce parts did not return calls.)

• More violence! Sunshine thought that part of the increase in divorce cases was due to the decreasing stigma faced by victims of domestic violence.

“More and more, a woman in an abusive relationship knows she has options — and, thankfully, the court has been helpful,” Sunshine said. He also credited District Attorney Charles Hynes for his work with domestic violence victims.

The bottom line? No one knows why Brooklyn is Splitsville, NYC.

“All I know is that I’ve been doing this for 20 years and business is good,” Mastrodomenico said. “But the uptick over the past four years? It’s a mystery.”