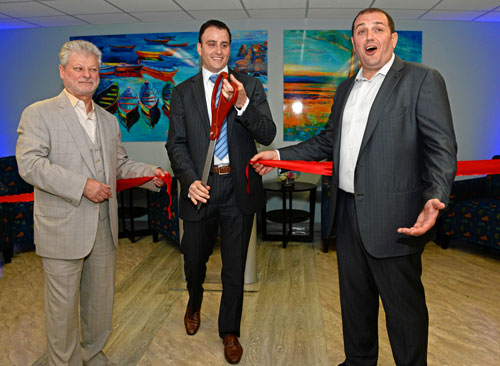 The flashbulbs were popping brighter than the lights on the Coney Boardwalk as Soloman Rutenberg, Michael Schrieber, and Alex Solovey cut the ribbon on the Sea Crest Health Care Center — newly renovated after Hurricane Sandy.

The revamped facility welcomed back more than 200 residents and celebrated 40 years of serving the needs of long-term care in the community.

When the super storm we’re all still recovering from or talking about hit the shore, it took out a major portion of the health center’s ground floor. The residents were evacuated, but the building was dead on arrival. Now, almost 24 months later, the dust has settled and Sea Crest is once again able to do what it does best — take care of its residents.

The facility had opened its doors prematurely to dispense care, said the veep of strategic planning for Cassena Care, the management team at Sea Crest.

“We brought our residents back to Sea Crest before we ideally wanted to,” said Michael Schrieber. “Now that the building is completely up and running, it’s great to see most of our residents return to the place that they call home and we are very thankful for all the help that was given in order to have the facility fully functional.”

All were treated to entertainment provided by Niki Nyemchek and Magda Fialek, a stupendous buffet, speeches, and a tour of the facility.

Patients Sharon Newman and Victor Kuznetsov — happy to be home in their remodeled bedrooms and outdoor patio space, with a new-and-improved menu to boot — spoke on behalf of the residents.

Top 5 Stories on Brownstoner This Week: Gage & Tollner Readies for Opening in March