Tebow in Brooklyn? One-time Jet is now a Met — and he could play for the Cyclones! 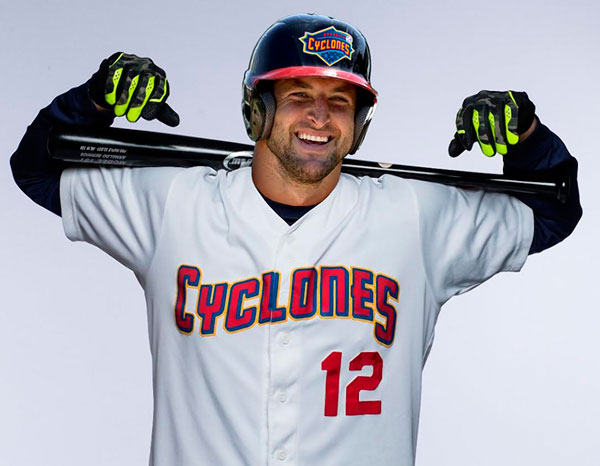 Heisman Trophy winner and former Denver Broncos star quarterback Tim Tebow may soon be headed to MCU Park — and Cyclones officials say a 2017 roster including the failed New York Jet would be the biggest news for Brooklyn sports since professional baseball returned to the borough in 2001.

The 29-year-old burst on the sports scene in 2007 when he was named college football’s best player after quarterbacking the University of Florida to a national championship. He led the Denver Broncos to an AFC West title in 2012 before being traded to the Jets after the season. He didn’t play much in the Meadowlands, and was eventually cut from the team in 2013. He hasn’t played an NFL game since.

The Mets signed Tebow last week, and announced he’ll play in the Arizona Fall League — albeit with weekends off so he can work and an analyst for college games broadcast by an ESPN affiliate.

But one of the next steps for Tebow could be the Cyclones, a team that is no stranger to bringing big-name players to MCU Park. Jose Reyes’ return to the Mets started in Brooklyn last summer, and his first stint with the team in June drew the biggest crowds of the season.

But Harner said having Tebow would be an even bigger draw thanks to the heartthrob’s good looks and athletic ability.

“I think [Reyes] times 100,” he said. “This story and this player are as much People Magazine as he is Sports Illustrated. So you’re getting the entertainment side of it as well as the sports side of it.”

Of course, there’s still a long way for Tebow to go before he suits up in a Cyclones uniform.

Tebow has never played professional baseball, and hasn’t played baseball competitively since his junior year in high school more than a decade ago.

That has left plenty of question marks surrounding what he’ll be able to do on the field, but if Tebow can make it to Brooklyn, his impact on the entire Cyclones franchise would be unprecedented.

“I’d imagine if he were here opening day 2017, which is very far off, but I mean that would be something that would be one of the [biggest] media turnouts we’ve had since the beginning of the franchise,” Harner said.

“And that was the first game in Brooklyn since the ’50s.”

The Mets expect Tebow to spend about three weeks in the instructional league — where he’ll compete with players in their teens — and then move on to a winter league or more specialized, one-on-one workouts in Florida.

“There’s so many moving parts to this, because no one really knows what to expect from him,” Harner said. “He’s never played professional baseball before.”

Then, if everything goes well, he’d move on to the next level — including a possibly landing in Brooklyn.

“At this point we’re kind of far off,” Harner said. “He’s got to get acclimated to professional baseball and get there and spend a little more time in St. Lucie. Then we’ll see where that goes.”