The greatest district leader debate — ever — is on! • Brooklyn Paper

The greatest district leader debate — ever — is on! 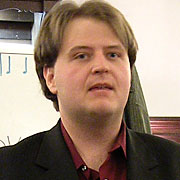 One for the ages: Kevin Peter Carroll (above) will fight longtime District Leader Ralph Perfetto (below) in one of the greatest debates ever for an unpaid state committeeman position.

The battle for the soul of Bay Ridge’s fractious Democratic community — embodied in the epic fight for district leader between newcomer Kevin Peter Carroll and longtime officeholder Ralph Perfetto — will explode in a war of words, courtesy of the newspaper you are now reading.

Next week, Carroll and Perfetto — embroiled in the most divisive race for the largely symbolic, unpaid state committeeman post in decades — will meet in our Downtown offices on May 13 for a debate that promises to be the biggest showdown since Lincoln met Douglas.

Perfetto, the 18-year incumbent, jumped at the chance to meet Carroll mano-a-mano.

“Set it up, anytime, anywhere,” he told us. “I should do one of those Rocky Balboa things — put a bandanna on my head and go running on Shore Road.”

Carroll, 23, was less adversarial, though he admitted that the debate would be a fight.

“I view Ralph as a friend, but friends often squabble,” said Carroll.

What will they fight over? Let us count the issues!

• Carroll says that Perfetto has been MIA in recent years, devoting himself more to getting other candidates elected than advocating for good policies.

• Carroll says that only he can lead the effort to get Bay Ridge redistricted into a single assembly district.

• Carroll has slammed Perfetto for being slow to grasp the importance of preventing gas drilling in New York’s upstate watershed.

• Perfetto rests his case on a list of accomplishments, ranging from cleaning up Shore Road to expanding parking on streets.

And then, of course, there’s the most important issue: Do District Leaders even matter? The answer, of course, is how could you ask such a thing?

“I can see it’s going to be a hotly contested debate,” Perfetto concluded.

The primary is Sept. 14. A video of the debate will be posted afterwards on our Web site, www.boropolitics.com.