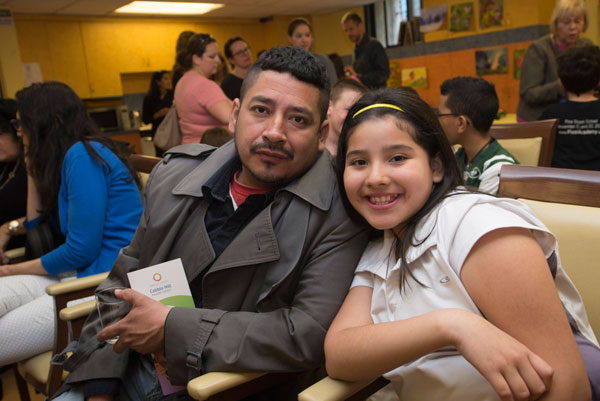 Essay esteem: Award winner Gabriela Garcia wrote about her father Lomelin as part of the Cobble Hill Health Center essay contest. Students wrote about older people in their lives who are special to them, and why.
Photo by Jordan Rathkopf

They’ve got the write stuff!

A Cobble Hill nursing home honored five local fourth and fifth graders for penning awesome essays about the special adults in their lives at an awards ceremony on May 11, and organizers said they were blown away by the kids’ love and respect for their elders.

“When we read these essays, we could not believe the depth of these feelings that they had toward these older people,” said Cobble Hill Health Center spokeswoman Nini Rubin.

Dozens of kids from nearby schools entered the contest, and residents at the center then judged the submissions and chose the five winners, who received certificates and free movie tickets and concessions from Cobble Hill Cinema.

The students couldn’t get any help writing their essays, and the mother of one winner says she was impressed with the work her offspring did all by himself.

“It’s incredibly rewarding as a parent to see him succeed on his own and to see him get recognized for his talent,” said Maggie Haberman, whose son, PS 32 student Maximus Gregorian, dedicated his essay to her.

Rubin said the contest and the center’s other outreach programs — such as its adopt-a-grandparent program, which pairs up young and old people for new friendships — are a great way for both the residents and volunteers feel connected with each other and the community.

“The giver gets just as much out of the relationship as the person that they give to,” she said. “Anybody who chooses to be a volunteer is right away a different sort of person.”