Unreal! MTV invites us on the set of “The Real World” 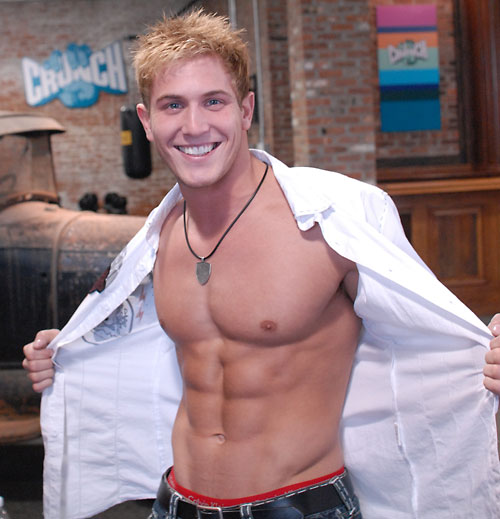 Remember Scott from MTV's “The Real World”? He filmed that show in the same Red Hook warehouse where restaurateur Buzzy O'Keeffe now hosts weddings and banquets. What's the connection? Who needs a connection with art this good?
The Brooklyn Paper / Shravan Vidyarthi

If MTV “Real World” castmate Scott Herman’s washboard torso is any indication, the reality show’s 21st season is going to be abs-olutely awesome.

The 23-year-old body builder is one of eight roommates in the Red Hook house. Actually, make that eight and a half roommates: castmate Devyn Simone, 20, bought a toy Yorkie, whom she named Brooklyn.

The dog is the only member of the cast to cuddle with Devyn, by the way; the cast member and former beauty queen, reminds viewers, “It’s easier to get into Heaven than to get into Devyn.”

These are the flashes of genius that journalists were able to collect last Thursday as MTV gave the press a backstage tour of the house at the end of Pier 41 in Red Hook. And while the setting could initially make any loft-loving Brooklynite drool, closer inspection revealed a house that is more movie set than crash pad.

Very few of the walls go up to the ceiling, and there are big box set lights affixed to the ceilings. The “bathroom” is more like a tiled space in the corner of the house, with three fog-free, clear glass shower stalls and an open sink area.

The only doors are on the toilets, but, as one cast member said, the walls “are like cardboard” (and then giggled, with a knowing smile).

MTV has its work cut out by the time “Real World: Brooklyn” airs in January if it wants to make its current season look as catty as seasons past.

In earlier years, cast members have wasted away their nights drinking in the house, making out in the hot tub and partaking in other general tomfoolery and mayhem. But not this time, apparently.

“In past seasons, the cast was drinking and partying. We were playing cards,” said one castmate, Sarah Rice, laughing. “I swear we’re more interesting than that!” She’s hot: Katelynn, 24, is the first transgendered person in “Real World” history. In other words, she was born with male genitalia. Interesting.
The Brooklyn Paper / Shravan Vidyarthi

In interviews, each castmate seemed polite and strangely normal. They played the video game RockBand together, and shot pool. When they did go out, they mostly went to Gaphattan (is this just “Real World: New York” that just happens to have a Brooklyn crib?)

Not for Katelynn Cusanelli, 24, the series’ first transgendered female.

“I fell in love and hung out a lot in Park Slope, Red Hook and Williamsburg,” she said, adding that she talked to old Red Hookers about the area before gentrifiers (or, um, the “Real World” cast, moved in.

This season, the housemates pursue their own projects, a format that alleviated potential melodrama, said J.D., 22.

“It gave us space alone and meant we could get along,” he explained. But the group did involved with everybody else’s life, going to each other’s open mic nights or practicing dance moves.

And the cameras were there, always rolling.

“It was kind of flattering,” admitted the hipster Mormon, Chet Cannon, 23.

But will it amount for good TV? That remains to be seen. “The Real World: Brooklyn” premieres on MTV on Wednesday, Jan. 7 at 10 pm.