Steins by the sea: Luna Park will throw an Oktobefest party this weekend, complete with games, food, and beer-based gelato.

The holiday of beer and bratwurst launches this weekend in Deutschland and in Brooklyn! Biergartens and bars all over the Borough of Kings will play Bavarian tunes and serve massive steins, and we have picked out the best spots celebrate Oktoberfest from now until October.

Both locations of the Black Forest Brooklyn beerhall will be decked out for the four weeks of the German beer festival! Black Forest Fort Greene will feature the Balkan brass band Slavic Soul Party at its Oktoberfest opening and closing parties, on Sept. 22 and Oct. 13! And the Smith Street location will host a pair of parties on Sept. 29 and Oct. 6, also with a live brass band. Each event will start with a keg-tapping ceremony with free-flowing beer, and guests can compete in the mug-holding competitions or enter the bar’s dirndl and lederhosen Instagram selfie challenge for cash prizes.

Check out Williamsburg’s popular Radegast Hall on Sept. 22 or 29 for its annual Oktoberfest parties, featuring the High and Mighty Brass Band and the Triad Brass Band, respectively. You will feel like you are in the middle of Munich while sitting on the bar’s classic wooden benches, while servers decked out in dirndls serve steins of beer and endless amounts of pork from the pig roast go around.

Get playful at the People’s Playground with classic lawn games (or drinking games)! Luna Park’s first Coney Island Oktoberfest, on Sept. 22–23, will feature plenty of beer, fun, and games, including bier pong, flip cup, cornhole, kan jam, and jenga. And Coney Cones will launch a limited-edition boozy Beer Gelato, which uses Sam Adams Oktoberfest to churn out an alcoholic treat either as gelato or sorbet. The gelato will be available (to people 21 or over) throughout October.

Get your freak on!

Step down the Boardwalk to the Freaktoberfest at Coney Island Brewery on Sept. 22. The brew masters there will debut two new cans of beer inspired by monster cereals: Count Flocula, a kolsch-style beer brewed with marshmallow fluff, lactose, and cocoa nibs, and Blueberry Boo-liner, a sour beer brewed with blueberries. The day will also feature a stein-hoisting contest, and a screening of the original “Dracula” film at 8 pm. 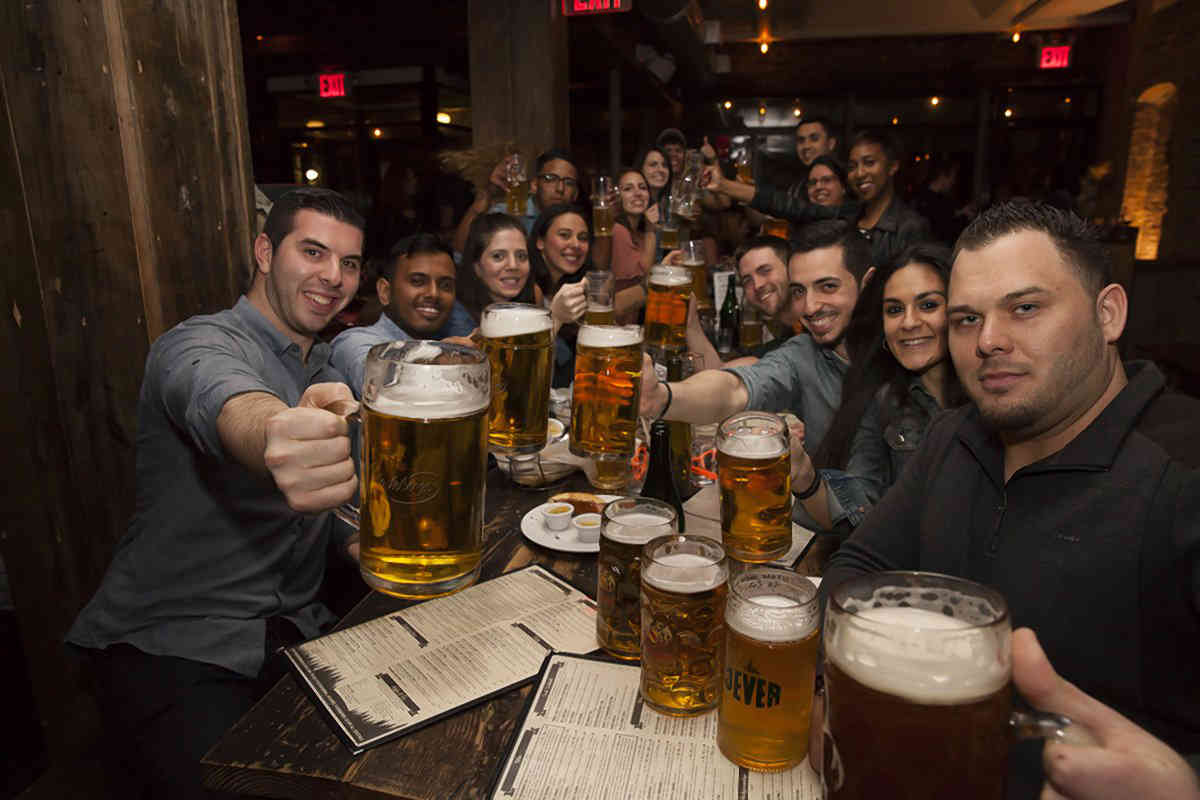 The Brooklyn Bavarian Biergarten in Park Slope will start its annual Oktoberfest celebration with a showdown between two German beers: Hofbrau and Grevensteiner. Help to settle which is best at a party with giveaways, music, and more!

Instead of German beer at Octoberfest, sample local beer at Blocktoberfest! The fifth annual event will pour brews from more than 35 New York City breweries in Bushwick on Oct. 6. Disc jockey Rob Swift will spin tunes for the bash, which will also feature food vendors to soak up the booze, including the Meat Hook, Plant Based, and Empanada Papa.

The Dumbo archway will transform into a Bavarian biergarten for two days to celebrate the German festival, on Oct. 5 and 6.

On Friday, four-hipster cover band the Polka Brother will play some classic Bohemian tunes, as well as pop songs with a bit of added polka flair. And on Saturday, the New Orleans-inspired Street Beat Brass Band will play German, polka, and oompah tunes.

Throughout the weekend, you can take home prizes by inventing faux-German phrases in the #SprechenSieDUMBO competition, drink beer from special steins, and chow down on a festive menu of pretzels, brats, and sauerkraut. Starring role: Beer is the centerpiece of the Oktoberfest celebration at the Brooklyn Bavarian Biergarten in Park Slope.
Photo by Stefano Giovannini