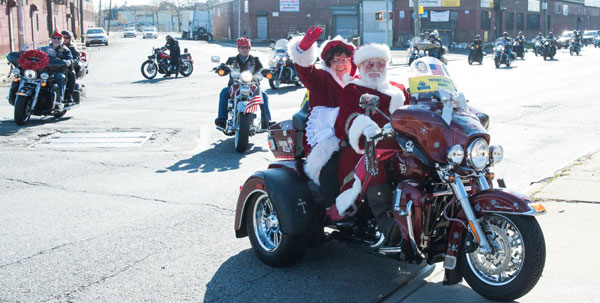 Santa’s switched from reindeer to horsepower.

A motorcycle-riding Santa Claus and about 100 leather-clad, hog-riding elves rode through the streets of Brooklyn spreading holiday cheer on Nov. 19, delivering toys to children at the Flatlands Family Residence as part of the Bikers of Brooklyn’s 28th annual Toy Run. A pack of bikers followed Mr. and Mrs. Claus to hand out the gifts — and it’s the best holiday present of all to see smiles on children’s faces, said the jolly old man himself.

“It was great, we had such a wonderful, wonderful time. The kids are very surprised. The kids really get a kick out of it,” Santa said. “It breaks your heart, and sometimes it brings a tear to your eye.”

The idea of the toy run is also to hopefully dismantle some of the negative connotations that people have about bikers — because they really have some of the mushiest hearts, said Santa.

“People have misconceptions about bikers,” Santa said. “One time we gave out a remote-control toy and this guy — he looked like Paul Bunyan, imagine the size of this guy — he’s on the ground on his belly playing with the kid.”

But motorcycle enthusiasts are really some of Santa’s best helpers during the holidays, the jolly gift-giver said.

“Those are my elves, I call them my elves,” he said.

Catholic Organization Knights of Columbus also collects jackets to donate to the children for the upcoming winter months, which landed them squarely on Santa’s “nice list,” the jolly old elf said.

“The old saying, ‘It’s better to give than to receive’ — there’s no better saying,” he said.