Child molester living in homeless shelter next to three schools 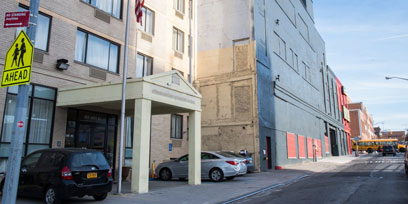 Unwelcome neighbor: A child molester is illegally living down the block from PS 24 and two other public schools at a Comfort Inn on 38th Street between Third and Fourth avenues.
Photo by Georgine Benvenuto

A convicted child molester is living in a Sunset Park homeless shelter right next to three public schools — in defiance of a court order to stay more than 1,000 feet away. Now parents are worried for their children’s safety and wondering why the city and state have failed to protect them.

“This is absolutely ridiculous,” said Sunset Parker Silvia Velasquez, whose daughter goes to an elementary school a block away from the child molester. “How could the city let this happen? I’m so upset I don’t even know what to say. Where the hell are our elected officials? Why does no one know about this?”

Daunte Gonzales had sex with a 9-year-old girl at least twice landing him a felony “sexual conduct against a child” conviction in 2015. He was sentenced to six months in jail but was instead given 10 years probation, records show. A judge determined that Gonzales poses a “moderate” risk of assaulting more children, and it is illegal for sex-offenders on probation and who are deemed such a risk to live within 1,000 feet of a school, said a spokeswoman for the state Division of Criminal Justice Services.

But Gonzales appears to have defied the order, according to an alert the state sex-offender registry issued on Nov. 22 stating he moved into the Comfort Inn on 38th Street between Third and Fourth avenues — fewer than 1,000 feet from PS 24, PS 371, and IS 136.

The city is renting all 77 rooms at the erstwhile inn to house homeless men, women, and children, but a rep from the Department of Homeless Services claims Gonzales is not in the city shelter system.

Staff at the Comfort Inn confirmed that the building has not operated as a hotel for more than two months and that it is not possible to rent a room there, because they are all being used to house the homeless.

The revelation is the latest in an ongoing saga of homeless shelters in Sunset Park. The city claims there is only one shelter operating there — a controversial site for single men on 49th Street between Second and Third avenues — but it is renting part or all of at least four hotels along Fourth Avenue between 22nd and 38th Street.

Some locals are charging that the neighborhood is carrying more than its fair share of the burden to house homeless.

“I find this absolutely outrageous but it’s typical of the city’s lack of respect for Sunset Park and for our elected leaders,” said Sunset Parker Tony Giordano, who tipped this paper off to Gonzales. “It’s just another example of the city taking advantage of Sunset Park.”

To receive alerts when moderate- or high-risk sex offenders move into or out of a neighborhood, go to nyalert.gov. Predator: Daunte Gonzales was convicted of molesting a 9-year-old girl that he knew in 2015.
New York State Division of Criminal Justice Services