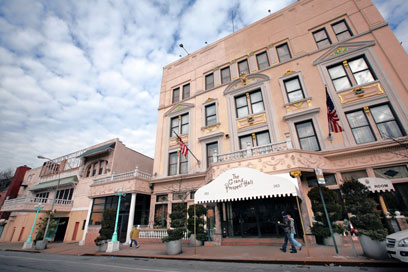 We make your dreams go boom!

And it will take more than bad online reviews and the wrath of vocal politicians for him to back down from the commitment, because breaking the vow by anything other than a court order would be an act of cowardice, according to the man made famous by his televised promise to “make your dreams come true.”

“If I cancel the contract, I’ll be a bad guy — a scared, yellow guy who chickened out,” said Michael “Mr. H” Halkias, who with his wife has owned the Vaudeville theater–turned-venue at 263 Prospect Ave. for 37 years. “I’m not doing anything illegal. Bring me a decision from a judge and everything is resolved, but don’t chase my tail.”

That event featured a $50-per-ticket raffle with prizes including a shotgun, two pistols, and two rifles, along with other incentives to trigger donations from locals asked to kick in anything from $300 “Liberty Level” pledges to $5,000 “Patriot Level” sponsorships.

Halkias — who previously told this newspaper he started opening his opulent venue to events beyond traditional weddings and parties in order to pay the rising property taxes on it — said that rifle-association members approached him to host their fund-raiser before going to the Coney Island Italian joint, and chose to take their business “down the road” to Gargiulo’s after learning the cost to reserve Grand Prospect Hall’s lavish 19th-century ballroom was too steep.

But after the Coney restaurateurs deemed hosting the gun lobby’s event too controversial, the members brought their business back to Halkias, who said he agreed to slash his fee and match whatever the Italian restaurant quoted because he wanted to help the group out.

“For me its not ‘the NRA,’ it’s a bunch of nice people from Bay Ridge and Bensonhurst who were screwed for no real reason,” he said. “I dropped my price to accommodate — I do that all the time. People who have money, I want to get my price. People who don’t have money I will be accommodating.”

Halkias, a Bay Ridge resident and former gun owner, said he thought the rifle association manufactured firearms until he read a history of the group on its website, which impressed the hall owner with its stated mission of teaching young people how to safely operate guns, he said.

“I see that they’re do-gooders,” said Halkias. “They are looking to train the young people, to teach them how to use weapons.”

The businessman claimed he’s already discussed his decision with some critics who’ve blasted it online and over the phone, but professed no political qualms with the rifle association or its Brooklyn members, saying that if hosting them leads to a backlash that hurts his bottom line, he’ll close Grand Prospect Hall, sell the more than century-old venue, and kick back and watch as locals fret over the condos likely to rise in its wake.

“I am not allowed to have an opinion? I have to shut up and let people tell me what to do?” Halkias said. “If they want Grand Prospect Hall to be here, those that love it, they have to make sure people don’t ruffle my feathers. I can take it, but there’s a point where you crack up and say, ‘Hell, let me go on vacation.’ ”

An e-mail sent to ticket holders informed them of the change in venue, and implored the gun advocates to spread the word among sympathizers because the rifle association would “not be advertising,” according to the message.

“We need everyone to try to encourage friends to join us in this fight to keep both our First and Second Amendments alive,” read the e-mail provided to the Brooklyn Paper by a ticket holder who requested anonymity.

But pistol packers attending the event shouldn’t expect a quiet evening at the old theater, as activists are already planning to protest outside the venue if it goes through with hosting the fund-raiser, according to a Windsor Terrace resident.

“The NRA is effectively a terrorist organization,” said Wrolf Courtney. “I very much plan on protesting this. They’re definitely going to see a few people there if they hold this event.”

And the local councilman, along with a handful of other officials, implored Halkias to reconsider hosting the event, promising more demonstrations if the gun show goes on.

The rifle-association supporters staging the event, however, have nothing to do with the politically active arm of the organization, according to its local field rep Greg Decer, who claimed that none of the money raised at the Brooklyn bash would go towards lobbying. Won't back down: Hall owner Michael Halkias, left, said nothing short of a court order would stop him from hosting the gun lobby's bash.
File photo by Bess Adler