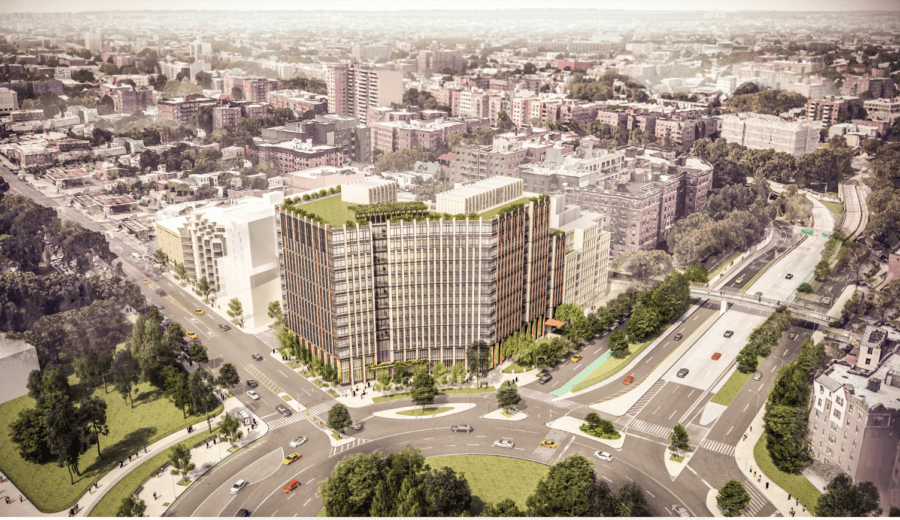 The proposed development at the southwest corner of Prospect Park the rezoning will allow.
FXcollaborative

The City Council’s Land Use sub-committee voted unanimously to approve the controversial 312 Coney Island Avenue rezoning in Windsor Terrace after the area’s Councilman, Brad Lander, voiced support for the project during the Dec. 7 hearing.

Lander acknowledged that he thought the proposal — which will allow for a 13-story mixed-use development containing rental apartments, space for a church, and retail — was not perfect, but was better than what could be built under the existing zoning.

“With the lot already up for development, having been essentially put on the market, if we leave the current underlying zoning in place, what I think we’ll get is a CubeSmart or a self storage facility like the one next door, which is 11 stories tall,” he said.

Indeed representatives for the developer said at several points during the public input process that if the zoning change were not granted, they would erect a large hotel as of right, a fate Lander said he wanted to avoid.

Lander said he negotiated with developer JEMB Realty to secure a number of conditions, including reducing the height of the building along Ocean Parkway and Park Circle from 13 stories to 11, and solidifying that the quarter of the units designated as “affordable” under the city’s Mandatory Inclusionary Housing program will be under the most affordable option available.

The rezoning has sparked fierce debate in the sleepy park-side neighborhood over the implications such a development will have on the neighborhood’s character and affordability. While some attack the project as a harbinger of gentrification and displacement and push for a completely low and middle income development, others appear to be welcoming the new units as a necessary increase to the limited housing supply — a divide Lander acknowledged when voicing his support.

“I know a lot of people want something better of us,” he said. “This is a neighborhood that just a few years ago was a real working class, diverse, low-rise place, and people don’t like seeing it transformed by big development.”

Opponents of the project who rallied against it at Park Circle on Dec. 6 slammed Lander’s decision, labeling it the result of backroom deals and a lack of community dialogue.

“Brad Lander is a phony,” said Linda Trujilla, a member of the neighborhood group Respect Brooklyn. “He denounces Trump but undermines democracy himself by shutting out public testimony while raking in contributions from a greedy bigoted development team.”

Locals have criticized the progressive council member and comptroller candidate for accepting campaign contributions from lobbyists associated with the developer behind the project. When confronted about it on Twitter, Lander said his campaign was in the process of returning the cash.

Community groups have also criticized the project for its association with the International Baptist Church, who own the land, and whose clergy have been known to make right-wing political posts on social media, including support for the National Rifle Association and President Donald Trump, which critics labeled as at-odds with the largely left-wing neighborhood.

Lander’s support of the proposal means the project will almost certainly be approved by the full council due to the unofficial practice of member deference, wherein members follow the lead of the elected whose district is directly affected by the land use change.

Be a Lover Fest draws artists and art lovers