Green-Wood Cemetery honored the victims of the horrific 1960 plane crash over Park Slope on the 50th anniversary of the calamity — and the mournful event ended at precisely the same time as the collision began: 10:33 am.

“It was pure synchronicity,” said Jane Flood of upstate Bronxville, whose younger brother, Vincent, a seminarian from Ohio, was among 134 people killed in the air and on ground when two jets clashed over Staten Island.

One of those planes — a United DC-8 — came crashing down on Seventh Avenue in what some people at the time thought was a Cold War attack.

Many area residents paid homage by joining dozens of relatives of the dead, who came from around the nation to the historic graveyard to dedicate an eight-foot granite monument bearing the names of its dead and the story of their last moments.

The new marker is a stone’s toss away from a grave containing the unidentified remains of some of the crash victims.

The monument was long overdue, said Green-Wood President Richard Moylan who was in school on the catastrophic day when United flight 826 demolished at least 10 buildings in ring of destruction centered on Sterling Place.

“The community had wanted to do something for a long time, so we picked up the ball and ran with it,” he said.

Time, though, hasn’t softened the devastation for Doug Petersen, who lost his father.

“I remember staring at the front door for three or four months, thinking that he was just going to walk through,” he said at the unveiling.

Another touching moment moved the crowd to a hush when the brother of the lone crash survivor — 11-year-old Stephen Baltz, who died the following day at Methodist Hospital — read a letter in which the doomed boy told his father, “Daddy, next time I fly, I want to fly my own plane, I want to be the pilot.”

The collision, the worst in U.S. aviation at the time, triggered an overhaul of air control systems to deter future disasters. 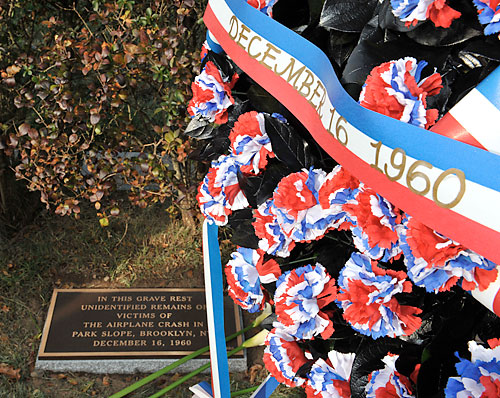 The unidentified remains are buried in a marked site.
Photo by Paul Martinka