By Jessica Parks and Kirstyn Brendlen
comments
Posted on November 3, 2022 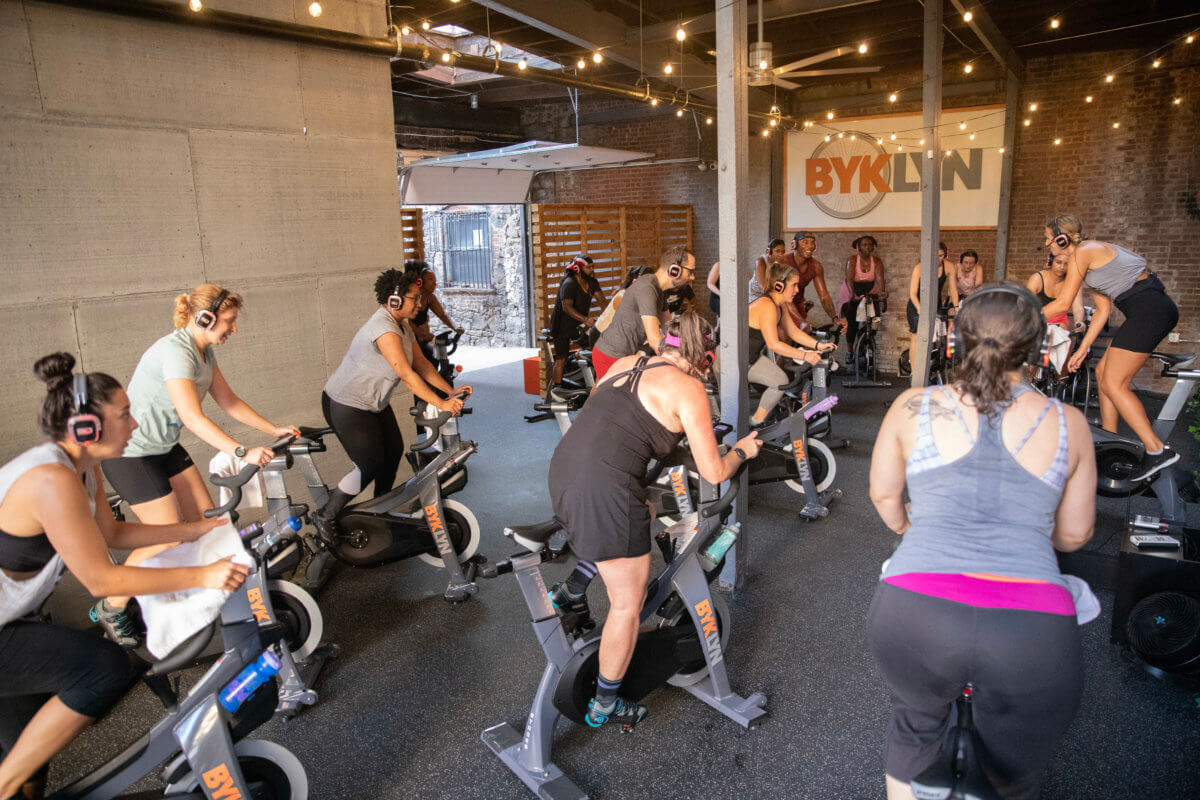 Cycle gyms — offering cardio-heavy classes featuring stationary bikes, loud music, and enthusiastic instructors, have become a common sight on the streets of New York City in the last decade. But BYKlyn, a Brooklyn-based studio that first opened in 2014, isn’t your typical cycle studio. It’s rooted in community and innovation, and champions other small businesses in the borough.

“We’re about community, and I know all gyms say that but not that many walk that walk when it comes to community,” Amy Glosser, the founder of the cycle studio, said. “[At BYKlyn,] it feels like you are coming someplace where people know you, want to know you and care about your experience.”

The independent cycling studio reopened in its new home on Bergen Street in Boerum Hill in September after a long few pandemic years that saw small businesses and gyms shutting their doors left and right.

Glosser was able to buoy her business through the pandemic using creative thinking and by accepting change, she said. She was forced to close her longtime location on Flatbush Avenue during the pandemic and eventually moved to an outdoor space across from the Barclays Center, where she was able to accommodate Covid protocols.

One of the facets of her business that Glosser prides herself on — and that sets her studio apart from the big gyms like SoulCycle and OrangeTheory — is that BYKlyn is accessible to anyone regardless of their financial situation or skill level.

“Our mission was as solid then as it is now, which is a really deep devotion to community and inclusivity, especially when a lot of boutique fitness wasn’t that,” she said. “We used to have a woman that would come and pay in cash. She was a nanny and she said, ‘My boss goes to SoulCycle but I go to BYKlyn.'”

And her mission is realized by her customers who told Brooklyn Paper that they feel comfortable at BYKlyn, having found community with their classmates and instructors.

“Everyone remembers your name … that’s been the biggest key difference, it really felt like every time you came in, they knew exactly who you were,” said regular rider Sally Bolig after a recent class. “They remembered your name, they wanted to get to know you better.”

“It’s such a small, tight-knit community. Not being the typical spin build, you’re like, ‘Oh, what are they going to think of me?” There’s no judgment here,” said Regina Auletta. “And it’s very compassionate, empathetic, caring, like…genuine.”

Glosser’s relationship with her membership is also different than what’s seen in big-name gyms and is a major factor in why she was able to keep her business afloat during the worst days of the pandemic, she said. During BYKlyn’s closure, Glosser wrote an email to her 220 gym members and asked that if they would be willing to continue paying their membership fees — even as the gym was unable to offer classes — so that she could pay her staff.

“I wrote to our membership base, which was about 220 at that point,” she said. “I said, ‘Look if you can continue to pay us so we can hold our staff in place until they can get on unemployment.'”

The continued payments also made it possible for Glosser to quickly move her business to its new outdoor space. Only two weeks after she first saw the space, she opened up the city’s only permanent outdoor cycling studio, which stayed open for 18 months.

Being the only cycle studio open in the early days of the pandemic, many new customers discovered BYKlyn as they were yearning for a sense of community and a space to exercise again in a safe space, Bolig told Brooklyn Paper.

“I started coming here during the pandemic because the first location was completely outdoors. I no longer felt comfortable going to the gym, this was an option I could walk to, that was woman-owned, that had an outdoor space where I could still have community and safely work out during the pandemic,” she said.

When their second New York City winter approached, Glosser said they couldn’t do another cold season outside, as it takes a toll on her staff — so she began her hunt for a more suitable year-round space.

That led her to BYKlyn’s new home on Bergen Street between Third and Fourth avenues.

“So I found this great space, and it was pretty dilapidated, but it has this gorgeous outdoor back area,” she said. “This is it. This is going to be the new bike deck.”

The back area now serves as BYKlyn’s “open-air bike deck,” which can open on three sides using garage doors so the class can cycle outdoors, with plenty of ventilation.

“And what you see when you come is an open-air bike deck,” Glosser said. “It has a 100-year-old roof. It’s gorgeous. With skylights, a beautiful brick wall, and then three garage doors that close us off when the weather is bad or when it’s cold.”

The Bergen Street location also made it possible for BYKlyn to open up its first-ever Stretch and Strength Lab where customers can work out their whole body, not just what they use in class, Glosser said.

“In addition to our outdoor bike deck, another important thing is we created is what we call our Stretch and Strength Lab which is our indoor studio,” she said. “In this day and age, you can see the fitness trends like F45 and OrangeTheory. People kind of want to have it all in one place.”

She also uses her space to promote fellow small businesses — the new space is also home to Salon 718, and Glosser is testing out locally made granola and sports drinks options to possibly sell at her gym. Each month, the gym partners with a different charity or organization to raise money — in October, they donated to The Brooklyn Cancer Center.

“Where you glow up or do your hair or makeup is in our beauty lounge and our beauty Lounge is branded by Salon 718. Okay. They have five hair salons in Brooklyn,” Glosser said.  “We look out for other small businesses. We partner a ton with other minority and women-owned businesses.”