By Danielle Furfaro Posted on February 8, 2014 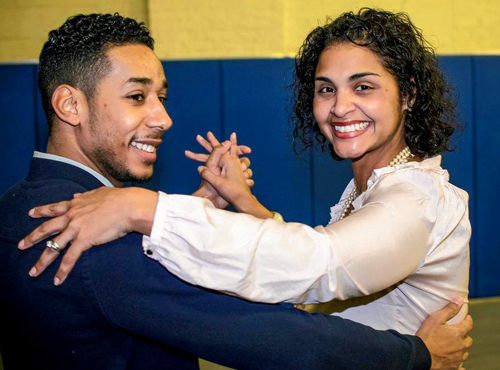 Get ready for dancing with the politicians.

Tonight, Congresswoman Nydia Velazquez (D–Bushwick) and Councilman Carlos Menchaca (D–Sunset Park) will face off against Deputy Borough President Diana Reyna and Councilman Antonio Reynoso (D–Bushwick) in a historic dance duel at a Williamsburg restaurant to raise money for a new building for the School Settlement Association, a youth-focused community center.

“As someone with a BA in Performing Arts, I connect dance, drama, and other mediums of art to social justice movements,” said Menchaca. “I’m confident our dancing will capture the passion and dedication that we have to public service.”

Nothing against these folks, but we hope for the sake of audience members that the gladiatorial rug-cutting contest at Giando on the Water is livelier than a principled budget presentation. And if the teams’ choice of dance genres is any indication, it will be. Menchaca and Velazquez will dance the tango while Reyna and Reynoso will tangle in a merengue.

Reynoso and Reyna both grew up with the merengue, an up-tempo Dominican dance that centers around small, quick steps and holding your partner close.

“The arts were always an important outlet for me, especially dance,” said Reynoso. “As a child in a Dominican household, I heard Latin music daily and fell in love.”

The dueling duos will make up two of the five teams vying for charity gold.

The other three are comprised of employees of the School Settlement group and Saint Nick’s Alliance, a housing advocacy organization. Judges will rate the contestants on qualities such as technique, playfulness, and compatibility.

“We are not judging them as we would professional dancers, but they do have to have some basic knowledge of dance they are doing,” said judge Desiree Dicupe, who is a dance and fitness instructor at the School Settlement.

School Settlement officials would like to raise $8 million to replace the 113-year-old building. They have already come up with half of that.