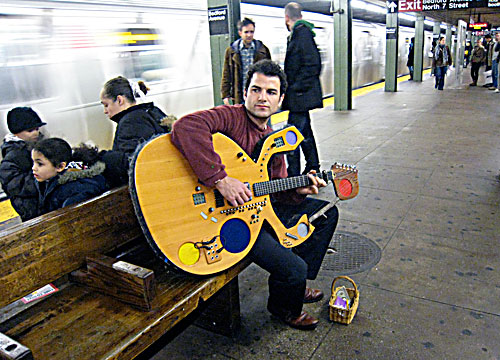 Ben Simon can be found many days playing his guitar in the Bedford Avenue L train station.
The Brooklyn Paper / Will Yakowicz

The vitriolic Southern Brooklyn blog that battled anything in the borough related to mustaches, bicycles, roof-grown produce, art, out-of-towners, and the name Caleb passed away at the old age of 6.

Die Hipster simply couldn’t keep up with the sheer quantity of live hipsters moving to the borough, the site’s anonymous writer told this paper.

“They have somewhat won in the North,” conceded the blogger, who has penned the angry screed since 2007 in the hopes of stanching the flow of the creative class. “It just pains me to keep writing about … these annoying wanna-be city types and then running into them later that day in my travels or reading about some bearded guy named Hayden in the New York Times because he owns a chicken and roasts beets on his roof.”

The Die Hipster blogger criticized his targets for being affluent and spoiled, and blamed hipsters — or in the blog’s parlance “interlopers,” “gentrifiers,” “transplants,” “trust-funders,” and “urban cupcakeologists” — for driving up rents across Brooklyn.

“It has trickled down the borough,” said the now-retired blogger, who frequently commented at the bottom of Brooklyn Paper articles (and, apparently, was not a big fan). “Why should I pay even $50 more a month because a bunch of try-hard artists and fauxhemians from the suburbs of middle America want to come here and be cool for a few years?”

His mission was to stop the wave of gentrification — and he tried to do it with outright animosity rather than persuasion. The blog featured a regular item in which the writer would violently fantasize about encountering a token hipster — a quail keeper, a unicyclist, or some other “culdesacian” — and then describe bludgeoning them to death.

Despite his aggressive ruminations against hipsters and occasionally this paper’s reporters, he was more than willing to cooperate on this story — and responded quickly and thoroughly to inquiries.

It’s this type of behavior that led some to question whether the man behind Die Hipster was truly an anti-hipster activist, or just a dedicated internet troll doing his best to make Brooklyn angry.

“He was just one long anonymous sneer, the previous generation’s gentrifier yelling ineffectually at the new kids,” said Clay Shirky, an NYU professor of TED Talks fame and an authority on the internet age, noting that Die Hipster’s “commitment to sorting people into buckets of authentic and poser” reeked of well, hipster-ness.

“The only real surprise here is that there were any posts in 2013 at all.”

Fans of the site say they will miss Die Hipster’s unique perspective — even if they didn’t always agree with the blog’s tone.

“I’m sad that he won’t be posting,” said 27-year-old Bensonhurt resident and Park Slope native Eddie Going, who has checked the site daily since he discovered it last year. “It was creative and it helped shed some light on the hipster phenomenon, but I didn’t like that he wanted to kill them.”

Die Hipster has racked up an impressive 2.7-million views according to a counter on the site, and the blogger grew to become one of the borough’s prominent anti-gentrification voices — joining infamous Brownstoner.com poster “The What” and some stalwarts on The Brooklyn Paper’s online comments section with his non-stop attack against new Brooklynites and everything they stand for.

But he fell short of his goal to keep hipsters from moving south of Prospect Park.

“I thought this website would somewhat prevent the spread of hipsters into southern parts of Brooklyn,” he wrote in a goodbye note on the site, lamenting an increasingly strong presence of bearded folks in the Ditmas Park area. “I really don’t think they’ll be going much further south and if so, it’ll be a long, long, long time before they thoroughly take over places like Dyker, Bay Ridge, Borough Park, Bensonhurst, Gravesend, Sheepshead Bay, and Marine Park.”

But he holds little hope that his children will grow up to see a single Brooklyn neighborhood free of free-range fowl and fair-trade coffee.

“In 30 years Brooklyn will be one giant flea market under a tent made out of flannel and beard hair,” he said. “Us natives will be living in the sewer tunnels for only $1,200 a month.”