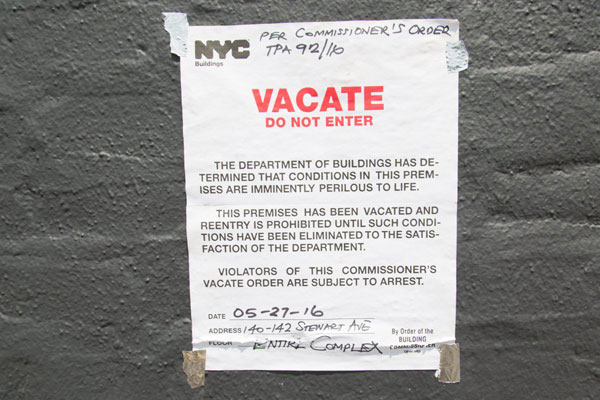 Now it really is a mirage.

The city pulled the plug on controversial Williamsburg pop-up nightclub the Brooklyn Mirage on Friday, revoking its right to party after the Fire Department found it was a disaster waiting to happen the night before.

New York’s Bravest shut the decadent outdoor venue on Stewart Avenue and Meserole Street around midnight on Thursday after finding it was full of “combustible material” and other fire hazards, and didn’t have enough staff on hand to ensure the place was safe from going up in flames, a Fire Department spokesman said.

A Department of Buildings then revoked the Mirage’s temporary place of assembly permit — which was otherwise valid through June 19, according to an agency spokeswoman — slapping a vacate order on the venue’s entrance that describes it as “imminently perilous to life.”

The venue’s organizers say they were blindsided by the eviction, claiming the venue had passed safety inspections with both the agency and Fire Department in the past, but that it would work on getting the permits back to open the doors once again.

“We look forward to learning how we may resolve new but unknown concerns,” they said in a statement on the Mirage’s Facebook page.

But it was just the latest run-in with law enforcement for the Mirage’s organizer City Fox — police busted the outfit selling booze without a liquor license at the Mirage last Saturday, and the Fire Department also shut the company’s Halloween party at a toxic Greenpoint warehouse last year after deciding it, too, was a fire hazard.

An official source claimed the venue was once again selling alcohol when firefighters closed it on Thursday, but several people in attendance said it was a totally dry event.

The State Liquor Authority denied the nightclub’s application for a series of temporary alcohol-slinging permits for the site earlier this month, on the grounds that the venue isn’t all that temporary.

The venue had taken the first steps towards applying for a full license, recently appearing before the local community board, though an authority spokesman said Saturday’s bust could affect its chances of scoring one. Party’s over: The city is revoking the Brooklyn Mirage’s permit to party after it determined the summer pop-up venue is a disaster waiting to happen.
Photo by Louise Wateridge