By Gersh Kuntzman and Andy Campbell
comments
Posted on November 24, 2010 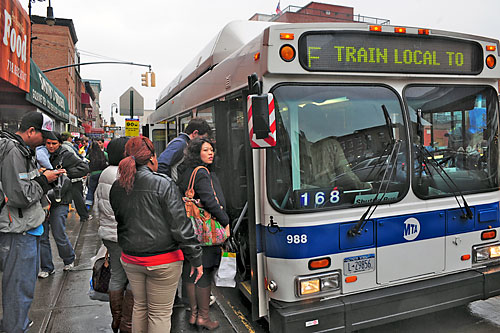 Add two more straphangers to the tens of thousands who have been screwed by ongoing track work on the F train — two women whose bags were swiped by pickpockets working a “very crowded” weekend shuttle bus.

The first incident occurred during the first of two November weekend outages of Brownstone Brooklyn’s frustrating main artery. In this case, the 27-year-old victim told cops that she was on the free shuttle at Fourth Avenue at around 4 pm on Nov. 14 when she felt someone brushing up against her.

It was no frisky fellow rider, however; when the lady got off the bus, she checked her bag and discovered that her wallet had been swiped. By the time she called her credit card company, $255 in charges had been made.

The next weekend, another pickpocket — or perhaps the same one! — stole a woman’s wallet and cash on the shuttle bus on Smith Street near Bergen Street.

The victim told cops that she was on the bus at about 4:18 pm on Nov. 20 when the perp pushed up against her from behind and said, “Sorry for pushing you, it’s crowding in here.”

Problem was, the guy was lying — in fact, he had $200 and gotten off the bus before the woman realized what had happened.