Galapagos’s evolution taking it to Detroit 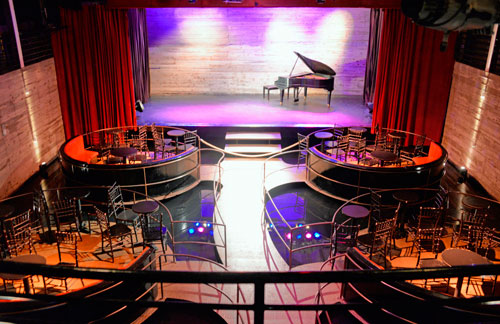 A Dumbo gallery and venue is moving to the Motor City.

In a stunning reversal of the Great Hipster Migration that has defined the part of Brooklyn nearest to the East River for going on two decades, Galapagos Art Space is packing it up and starting a new life in the Midwest. The move will end a 19-year run in the borough, first in Williamsburg, then, starting in 2008, in Dumbo. The head of the operation says that it may be setting out for more post-apocalyptic pastures, but it will remain Kings County to the core.

“We were born in Brooklyn. We grew up in Brooklyn,” said Robert Elmes, executive director at Galapagos. “We’ll always be a Brooklyn venue.”

Galapagos had enjoyed below-market rent at its space on Main Street between Water and Plymouth streets courtesy of its landlord Two Trees, the developer that made Dumbo the real-estate pressure cooker it is today by carefully cultivating an artistic community there. But now the lease is up and, though Two Trees is willing to keep the rent below what it could charge, it is asking too much, Elmes said.

“We just would not be able to work on our mission with those numbers,” he said.

In discussing the impending move a third of the way across the country, Elmes said Highland Park, a small city surrounded by Detroit, reminds him of the Williamsburg he set up shop in during the mid-1990s. It is the land of milk and affordable real estate, he explained, and it is only a matter of time before artists from elsewhere catch on.

His opinion of the cultural aptitude of Detroit’s 713,000 residents is apparently not high.

“In Detroit there’s time and space,” he said. “And the people are coming.”

Williamsburg’s scene was more established than the bankrupt city’s is now, Elmes explained, but Galapagos can make it there.

“We’re confident we can do well in Detroit,” he said. “Even if we’re a little earlier than we were in Williamsburg.”

Increasing costs forced Galapagos to make a move to Dumbo in 2008. There Elmes’s team increased the size of the space as well as the size of the venue’s signature centerpiece, its indoor lake. The size of that lake will increase again when the group moves to the Great Lakes region, with the water feature taking up about as much space as a Major League Baseball infield.

Galapagos is forming a veritable arts archipelago, having purchased nine buildings, including five on one block in Highland Park, three elsewhere in the city, and one in the Corktown neighborhood of Detroit proper. Elmes plans to develop a large main performance space complemented by smaller stages and a gallery space. He would not disclose the exact cost of the properties, but said it was less than $1 million.

Elmes is excited to move but is sad to leave Kings County. Looking back, his favorite events include the annual New Years Eve Party, a Ted Talk, and the Nerd Nite series, which featured presentations and trivia on science topics. He also has fond memories of the help he received from the Dumbo community following Superstorm Sandy, when the space was inundated with more than five feet of water, destroying nearly all its electronic gear.

“That was too much lake,” he said.

Neighbors raised $10,000 and gathered 80 volunteers to help out, which enabled Galapagos to reopen within a week of the storm.

“That told us we were an important part of the community here,” Elmes said.

A spokeswoman for Two Trees said that the company supports local artists with reduced and sometimes free rent, and that the current Galapagos space will continue to be used for a cultural purpose.

Galapagos’s last show is its Floating Kabarette on Dec. 20. The tortoise and the airfare: Galapagos is leaving its Main Street home, and Brooklyn, at the end of the month.
Photo by Elizabeth Graham